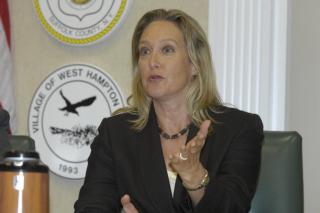 Suffolk County Democrats have tapped Southampton Town Councilwoman Bridget Fleming as their pick to replace County Legislator Jay Schneiderman, who is barred by term limits from seeking reelection this year.

Suffolk County Democratic Committee Chairman Rich Schaffer said he met with Ms. Fleming, a resident of Noyac, over the weekend to officially extend the party’s support. She would have the party’s nomination, barring a primary challenge in September.

Ms. Fleming said Tuesday morning that she was impressed by the proposed campaign strategy and honored by the opportunity. “If I run that race, if I get the nomination, I feel I would be running with the wind in my sails,” she said. “It’s an exciting process.”

Ms. Fleming said she plans to formally announce her candidacy in two weeks. If elected, she would represent the South Fork, from East Moriches to Montauk, on the legislature’s 18-member panel in Hauppauge.

Mr. Schaffer said his committee picked Ms. Fleming, who had been rumored to be a likely candidate for months, because of her accomplishments as a Southampton Town councilwoman, in particular her environmental stewardship. Her work on quality-of-life issues and code enforcement also were points of emphasis for the committee, he said.

“She’s got a great track record as a Town Board member in Southampton—she’s built a terrific reputation of working with the people to represent their needs,” he said. “She’s very in tune with environmental protection, which is important to South Fork residents.”

Barring any primary challenges, Ms. Fleming will face Springs resident Amos Goodman, 31, who has been endorsed by the Suffolk County Republicans, to replace Mr. Schneiderman in Hauppauge.

Mr. Goodman, a financial consultant, said his experience in the private sector will allow him to better facilitate job creation and business growth in the county. He said the starkest contrast between him and Ms. Fleming is on the issue of development: He said Ms. Fleming is often the lone voice on the Town Board speaking against development, while he believes there are times when it is crucial, for new business and affordable housing.

“I think this will be a very spirited and important race that puts two very different points of view against each other,” he said. “That’s what democracy is all about.”

A former New York City assistant district attorney, Ms. Fleming, 55, has served on the Town Board since 2010, originally voted in during a special election to finish out the final year of then-Councilwoman Anna Throne-Holst’s term after she was elected as town supervisor. Ms. Fleming won her first full four-year term the following year; in her only run for Town Board, she was the top vote-getter, totaling 6,263, which was 500 more than the next-closest candidate, Ms. Scalera.

She is slated to be up for reelection this fall, along with Ms. Throne-Holst and Councilwoman Christine Scalera—leaving a vacancy on the Democratic slate for Town Board.

Ms. Fleming challenged State Senator Kenneth LaValle in 2012 and lost to the longtime incumbent by 25,000 votes, although it was safe run: She was still a member of the Town Board at the time.

“I’ve really enjoyed my five years with the Town Board,” she said Tuesday. “We’ve been able to do so much in five years, including a really smart approach to finance. We’ve put in a great sustainability plan that’s baked into all decisions of town government. We’ve had real solutions for threats to our working farms, and we’ve brought significant and needed reforms to the police department.”

Mr. Schneiderman, who is completing his sixth two-year term in Hauppauge, said Ms. Fleming called him after her meeting with Mr. Schaffer. An Independence Party member from Montauk, Mr. Schneiderman said he thinks Ms. Fleming will be a strong candidate and, if elected, a successful legislator.

He said the two discussed strategies for continuing his work protecting the environment and increasing public transportation on the East End, among other things.

“I think she’d be a strong candidate, and I think she’d be a good legislator as well,” he said. “She ran against Senator LaValle and had a pretty strong showing against a longtime incumbent—I think she actually won East Hampton, which I was impressed by.”

As for his own future, Mr. Schneiderman, a former East Hampton Town councilman and supervisor, declined to share his plans when reached by phone Tuesday morning. However, he said he will announce his next move sometime before Memorial Day: “I don’t plan on disappearing. I want to stay active and involved.”