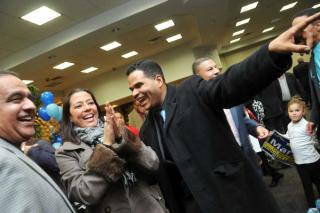 Democrats will maintain their majority in the Suffolk County Legislature after winning at least 12 of 18 seats -- including some originally considered toss-ups -- late Tuesday night.

The election results ensure that County Executive Steve Bellone, a Democrat, will continue to enjoy limited resistance to his agenda the next two years, as he approaches the end of his first term in office. He also will keep his veto-proof majority.

Democrats and their minor party allies now enjoy a 12-5 advantage, with one vacancy. One race to determine whether that majority rises to 13-5, or settles at 12-6, remained too close to call late Tuesday night.

"We're cautiously optimistic," Suffolk Democratic chairman Richard Schaffer said. "It's going to be close, but I definitely expect that we will keep our majority, if not all 13 seats."

Most notably, Democrats retained one of two hotly contested South Shore seats that their incumbents have vacated, or will vacate. In the 8th District, where longtime Presiding Officer William Lindsay (D-Holbrook) served until his death in September, his son, William J. Lindsay III, a Bohemia insurance broker, beat Republican Anthony Musumeci, an engineering company manager.

"I know we're still counting the votes, but they're coming in our way," McCaffrey said. "We haven't had this seat since 1987."

Because Montano is often critical of Bellone, he accused county Democratic leaders of engineering the successful primary challenge from Martinez, who is the sister of a Tony Martinez, a Babylon Town Board member with ties to Bellone.

"We have to take that house back," said Suffolk GOP chairman John Jay LaValle. "We haven't had it in eight or nine years."