Democrats have candidate for Huntington Town Board 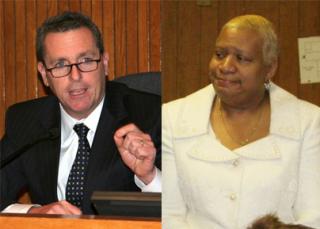 The race for Huntington Town Board has gotten narrower, now that Tracey Edwards, a Verizon executive from Dix Hills, has been chosen to run alongside Councilman Mark Cuthbertson on the Democratic ticket.

The two will face Councilman Mark Mayoka and Commack attorney Josh Price, the Republicans' picks, at the polls in November.

Four candidates, including Edwards, had been vying for the Huntington Democratic Committee nomination just two weeks ago and were gearing up for a primary. The other three contenders were Keith Barrett, president of the Huntington Station Business Improvement District; Ed Perez, a business development consultant; and attorney Ed Nitkewicz.

"The other candidates thought about the possibility of a primary and all that … would entail and decided it might be too destructive for the party if we went ahead with that," committee Chairwoman Mary Collins said. "So they all got together and decided they would step aside in favor of Tracey."

Suffolk County Democratic Committee Chairman Rich Schaffer had previously said that it would be best for the party for the four to reach an agreement among themselves as to who should run. At the second session of the Democrats' nominating convention on May 28, Schaffer also said the party wanted to avoid the unpleasantness that had ensued a week earlier, when members deadlocked over selecting one of the three candidates for highway superintendent.

Collins said the Democrats have a great ticket for November. "A businesswoman, a minority," she said, referring to Edwards. " I think it's a good deal all around for all of us." Edwards previously ran for a seat on the Town Board, in 2001. She lost to former Councilman Mark Capodanno. Of Cuthbertson, Mayoka, Edwards and Price, the two candidates with the most votes will win seats on the Town Board.

The GOP is also confident of its chances. "We have an outstanding ticket," said Toni Tepe, chairwoman of the Huntington Republican Committee. "And I feel that we have a very united committee and that we're going to move forward and have the voters decide in November who they feel can best represent them."