Democrat Lindsay to Follow in His Father’s Legislative Footsteps 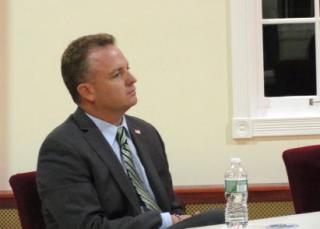 William J. Lindsay III, son of the late William J. Lindsay who held a legislature seat for 12 years, is following in his father’s footsteps in being elected to the 8th district county post in his first-ever run for office.

Lindsay's father, William J. Lindsay, who was the longest serving presiding officer of the Suffolk County Legislature, died at 67 years old after a long battle with a rare lung cancer on Sept. 11 of this year. The Democrat from Holbrook was first elected to the legislature in a special election in 2001 to fill the seat vacated by Steve Levy, before becoming presiding officer in 2006.

In another local legislative race, longtime incumbent legislator and West Islip resident Thomas Barraga was unopposed in this year’s election for the first-time ever and received 7,117 votes with 65 of 66 districts reported to attain his fifth two-year term in the 11th district.