By:
By Carl MacGowan
Publication:
Newsday 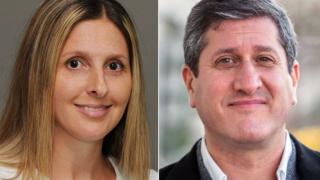 Democrat Jonathan Kornreich has won a Brookhaven Town Board seat in a special election to fill the vacant post.

Kornreich will complete the unexpired four-year term of Democrat Valerie Cartright, who resigned in December after being elected in November to serve as a State Supreme Court justice. The term ends on Dec. 31, 2023.

With Kornreich’s victory, Republicans will hold a 6-1 majority on the town board.

In an interview Wednesday, Kornreich said "the weight of the responsibility is very humbling," adding that he had received support from voters who backed him "not because of me personally, but because they are people who are trying to create a world that they want to live in. They support me because they want to see a world that’s more just and more fair and [where] they have more economic opportunities and the town is a good place to live and work."

He said he planned to focus on economic development and environmental protection, citing vacant buildings and underdeveloped areas in some parts of the the district, which includes North Shore communities such as Setauket, Port Jefferson and Terryville.

"I’d like to see some revitalization along the [state Route] 25A corridor up into Port Jefferson Station," Kornreich said. "That’s a very big one."

Attempts to reach Laucella were unsuccessful.

Kornreich, who owns a property management and residential construction business and is president of the Three Village Civic Association, won with 1,863 votes, or 85.42%, to Laucella’s 313 votes, according to the Board of Elections. Laucella, 48, of Stony Brook, a community activist and volunteer, won 251 votes on the Republican line and 62 votes on the Conservative line.

Kornreich will be sworn into office when the election is certified.

Suffolk Democratic Elections Commissioner Anita Katz said the vote will be certified in about a week, after about 1,000 absentee ballots are counted. The number of absentee ballots is less than Kornreich’s current lead over Laucella, she said.

Kornreich said he is allowed to continue serving on the Three Village school board, but he is undecided about serving in that role after he joins the town board. He said his decision will depend on how much time is required to do both jobs.

He said he plans to resign as president of the civic group.