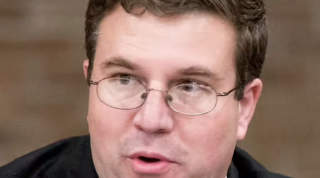 Democrat Dave Calone, a venture capitalist and a former federal and state prosecutor, has announced his candidacy for election as Suffolk County executive next year.

County Executive Steve Bellone, a Democrat first elected in 2011, has reached his term limit and will not run next year, opening up the seat.

Calone, 48, of Setauket, said in a news release he has raised $1 million in campaign funds.

He cited the environment and affordable living as his key reasons for running.

“I’m running for County Executive to make sure that everyone benefits from the same kind of opportunities that I have enjoyed growing up and living in Suffolk County,” Calone said in a statement last Friday.

“I'm eager to get to work for the people of Suffolk, to enable everyone to have the chance to get a good paying job, to protect our clean air and water, to help families afford to live here, and to create safe, thriving communities," Calone said.

Calone has served as chairman of the Suffolk County Planning Commission.

He also was co-founder of a county initiative to support local small businesses and workers during the COVID-19 pandemic.

From 2012 to 2015, Calone served as a board member of the Community Development Corp. of Long Island, an affordable housing nonprofit.

Calone also served as a trustee of the Long Island Power Authority from 2009 to 2012.

He ran unsuccessfully against Anna Throne-Holst in 2016 for the Democratic nomination in the 1st Congressional District. Throne-Holst lost to Republican Lee Zeldin in the general election.

Suffolk Democratic Committee chairman Richard Schaffer told Newsday he has been meeting with potential county executive candidates as the party searches for the strongest nominee.

Schaffer pointed to Calone’s $1 million war chest and his background as a former prosecutor — he worked for the U.S. Department of Justice from 1999 until 2003, and the New York State Attorney General's office from 2004 until 2005 — as strengths for his campaign.

“It says to me that he's in this to win it, and will be a formidable candidate,” Schaffer said.

No GOP candidates have declared their candidacies, but Suffolk Republican Committee chairman Jesse Garcia said the party has “a bullpen of qualified, prepared, tested candidates for county executive.”

Garcia argued, “the voters of Suffolk County have seen differences between Democratic policies and Republican policies and they overwhelmingly embrace our policies.”