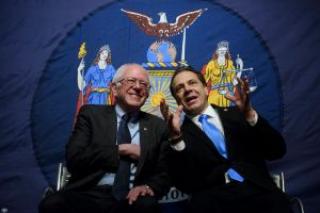 Gov. Andrew M. Cuomo on Tuesday proposed free state college tuition assistance to ease the burden of paying for higher education for hundreds of thousands of low- and middle-income students.

Cuomo announced the Excelsior Scholarship college degree program, which would help cover the cost of SUNY and CUNY tuition, including at two-year community colleges, for students whose families earn up to $125,000 annually. Individuals also would qualify.

The governor made the announcement before a cheering audience of high school students, labor leaders and elected officials at LaGuardia Community College.

Cuomo said of college debt, “That is not fair, that is not right.”

He said it hobbles the futures of young people. “The debt is so high, it’s like starting a race with an anchor tied to your leg.”

The Democratic governor was joined by Sen. Bernie Sanders (I-Vt.) at the announcement. The former presidential candidate made free public education a chief mission of his campaign.

The scholarship would be a supplement to the Tuition Assistant Program, a state program, and federal aid.

“If New York State does it this year, mark my words, state after state will follow,” said Sanders, who was received with a standing ovation.

In the audience, several students who attend a nearby high school said free or affordable tuition would alleviate stress on their families. Many come from immigrant families.

“It’s going to save us a lot of money,” said Aruna Parkash, 17, of Jackson Heights, who hopes to attend Queens College to study education.

Cindy Meyo, 17, of Elmhurst, said the program could help her fulfill ambitions to live a better life than her parents had.

“Coming from the background I do, my parents aren’t rich,” she said. “It would mean a lot.”

Cuomo’s proposal would have to be paid for in the state budget, which will require approval by the Legislature by April 1. But on Tuesday there was early support for the proposal that has existed in various forms in Albany for a couple of years.

“For so many New Yorkers, the snowballing cost of a higher education has meant drowning in student debt for over a decade; for countless more, it serves as an outright roadblock,” said Assemb. James Skoufis (D-Hudson Valley). He notes he introduced a tuition free bill in 2014 and it was supported by 80 of 150 Assembly members.

“Our students and families cannot wait any longer,” he said. “Now’s the time for the governor and Legislature to come together and heed the call from our families to live up to SUNY’s and CUNY’s original promise: a truly affordable and high-quality experience.”

Senate Democratic leader Andrea Stewart-Cousins said a tuition-free bill would already be law in New York if it weren’t for past opposition by the Senate’s Republican majority.

“This is perfect example of why the Democrats that comprise a majority of the Senate should unite,” said Stewart-Cousins (D-Yonkers), who leads the mainline minority Democratic conference which is at odds with the Independent Democratic Conference. “It is clear that initiatives like this would pass in a Democratic majority.”

State University of New York Chancellor Nancy Zimpher and SUNY board Chairman H. Carl McCall, each of whom are Cuomo allies, immediately supported the idea.

“This plan positions New York State as the first in the nation to not only provide free tuition for students from low- and- middle-income families pursuing two- and- four-year degrees, but to also go a step further, incentivizing full-time enrollment and college completion — both of which are proven game changers in students success,” McCall and Zimpher said a joint statement. “This is what college affordability is all about.”

The proposal follows more than five years of automatic tuition increases of $300 annually endorsed by Cuomo, Zimpher and McCall that they called a “rational tuition” plan that avoids long stretches of no tuition increases followed by a spike.

Since 2010, tuition has risen about 30 percent to $6,470 per year for New York State residents attending four-year schools on average.

The labor-backed CUNY Rising Alliance said the free-tuition program should be available to undocumented immigrants and should be accompanied by more state aid to the public university systems.

“CUNY and SUNY students need free tuition, but they also need smaller classes, improved course offerings, modern facilities, increased advisement and tutoring and the best faculty and staff,” the group said in a statement. “Since 1975 CUNY’s full time faculty has been diminished by 33 percent while its student body has increased by about 15 percent. This trend must be reversed, if students are to get the education they deserve.”