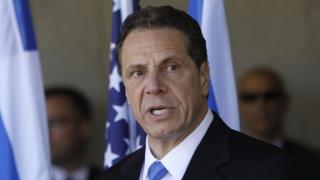 State agencies also won’t be able to ask about immigration status unless the law requires it or the information is needed to provide benefits or services.

The executive order is the latest effort by the Democratic governor to combat a crackdown on illegal immigration by the administration of President Donald Trump.

“As Washington squabbles over rolling back sensible immigration policy, we are taking action to help protect all New Yorkers from unwarranted targeting by government,” Cuomo said in a statement.

“New York became the Empire State due to the contributions of immigrants from every corner of the globe and we will not let the politics of fear and intimidation divide us,” Cuomo said.

“The immigrants who contributed so much to our Empire State, came here legally,” Long said. “We are proud of being a melting pot of legal immigration. It is illegal immigration that we oppose; when you enter illegally you make the statement that the rule of law does not apply to you.

“Governor Cuomo’s executive order gives immigrants who have entered our beloved country illegally his blessing to disregard the rule of law and allows illegal immigrants to reap the benefits created by a society that is based on the rule of law,” Long said in a statement.

Assembly Speaker Carl Heastie (D-Bronx) was among many Democrats to applause Cuomo’s action.

“Protecting our country’s borders does not require using fear to intimidate honest, hardworking people who have made this country their home,” Heastie said.

Cuomo’s order states: “The reporting of unlawful activity by immigrant witnesses and victims is critical to strengthening ties between immigrants and law enforcement, reducing crime, and enhancing the State’s ability to protect the safety of all of its residents.”

An executive order doesn’t require approval by the Legislature, but could be challenged in the courts.