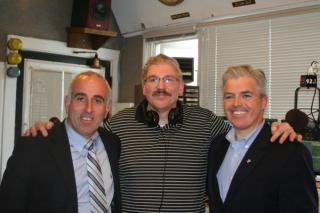 Suffolk County Executive Steve Bellone, accompanied by Suffolk County Legislator Jay Schneiderman, toured the East End last Wednesday, declaring that “the county’s role should not be to second guess decisions made at a local level.”
Mr. Bellone’s day began with a question-and-answer session with government officials from Southampton, Southold, Shelter Island, Riverhead and East Hampton. Issues like public transportation and affordable housing were raised, but the panel also discussed water quality, which Mr.Bellone said he has made his priority.

Following the panel discussion, which took place in Riverhead, Mr. Bellone and Mr. Schneiderman were interviewed live on Sag Harbor’s WLNG. Dan Duprey conducted the interview and asked questions about air quality, water quality and the recent legislation that will make 21 the minimum age to buy tobacco.

The County Executive ended his day with a roundtable discussion with local fishermen at the Clam and Chowder House at Salivar’s Dock in Montauk. Fishermen were particularly concerned about what they said are unfair fluke take limits and the dangers of certain mosquito sprays which they claim are fatal to lobsters. Mr. Bellone thanked them for bringing these issues to his attention.
“That’s what we’re here for,” Mr.Bellone said. “Tell us how to help you.”