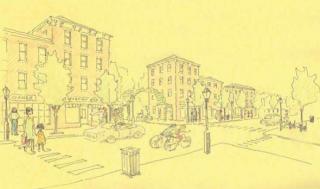 In 2014 the Brookhaven town board approved a study for a potential hub project for Port Jefferson Station, specifically in the area of Route 112 north of Route 347 and south of the Long Island Rail Road train tracks near Hallock Avenue. The goal of the study and community-visioning document was to gauge public interest and provide in-depth plans for what a walkable, downtown Main Street residence and commercial retail space might look like in Port Jeff Station. In the time since the study was conducted, Cartright, who has played an instrumental role in the progress of the plan, which preceded her taking office, since taking over, said a steering committee has been appointed to continue moving the project forward. Cartright said in an email the town has been working with the steering committee to discuss potential projects and proposals with landowners in the area.

“The community has expressed a desire for revitalization in the study area in Port Jefferson Station/Terryville,” she said in an email through spokeswoman Jennifer Martin. “From a town perspective, we agree with the community that this area calls for a flourishing and vibrant ‘walkable’ downtown that has an appropriate mix of commercial and residential. Both the town and the community wish to see a smoother transition from Port Jefferson Village to the station in that corridor.”

Cartright added the next step in the process is to determine the compatibility of landowners’ visions for the future of the area with the plans laid out in the hub study-visioning document.

Lee Koppelman, a longtime Suffolk County planner and a current professor at Stony Brook University, submitted a letter in support of the proposed project.

“The overall goal sought for the corridor is to achieve improvements that will transform this core of the hamlet into a destination center with improved, coordinated architectural design; safe walkable ambience; and the preservation of historical sites,” he said.

A survey was sent out to 6,500 residences in 2013 to assess if the community would be behind a project like this. Some responses included “the idea for a real downtown is great,” “the area is terrible — clean it up!” and “beautification is always welcome.” Others suggested building affordable housing would be preferable, congestion in the area is already excessive and abandoned buildings should not be replaced with brand new ones.

In the survey residents were able to weigh in on aspects of the project they might like to see. Of those who responded to the questionnaire, 82 percent said they wanted to see a historic looking downtown area, 92 percent were in favor of public Wi-Fi and 87 percent would be in favor of a grocery store. A vast majority of those who responded also said they would not patronize stores in the area if they were required to pay for parking — about 89 percent.

Port Jefferson Village secured grant money from New York State and Suffolk County earlier this year to improve the train station, parking surrounding the train station and to fix blighted buildings in the area just north of the station on Main Street.