Congressman Suozzi sworn in, sets up district office in Huntington 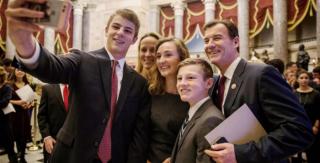 Congressman Tom Suozzi (D-Glen Cove) has wasted no time getting to work, opening his district office at 478A Park Ave. in Huntington last week, and getting sworn into office Tuesday, Jan. 3, in Washington D.C.

The office, which opened on Dec. 27, is located at Sunny Pond Farm, inside two historic homes dating back to the American Revolution, which have been preserved and converted into an office space. The homes are located on the property of former Huntington Congressman Silas Wood who represented Long Island in the early 19th century.

Suozzi said he wanted to choose an area that would be easily available for all of his constituents.

The congressman said he will also have another satellite office in Queens.

The former Nassau County executive officially became a member of the 115th Congress this week.

“It’s a great honor to be entrusted as your voice in the nation’s capital,” he said. “I look forward to working with all of you and my colleagues in Washington, from both sides of the aisle, to get things done for the families of Long Island and Queens.”

“This race has really been about the values my dad taught,” Suozzi said during his post-results speech at The Milleridge Inn in Jericho Nov 8. “I’m going to need everyone in this room to help me because if I stick my head up and say something that’s not the normal thing to be said, they’re going to try and smack us down.”

He added regardless of the results of the presidential election, “we really need to do some soul searching,” referencing health care coverage, the shrinking middle class, immigration reform, climate chance, gun violence and the tax code. He said there’s more important work to be done.