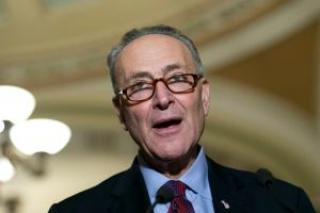 WASHINGTON — Sen. Chuck Schumer prodded President-elect Donald Trump and said Democrats will hold him and the Republican majority “accountable” to the American people and the law as the New Yorker made his first speech Tuesday as Senate minority leader.

“With all due respect, America cannot afford a Twitter presidency,” Schumer said as he warned Trump about using social media to make policy. “These issues are complex and demand both careful consideration and action. We cannot tweet them away.”

In remarks made on the Senate floor, Schumer addressed Trump directly. Schumer appealed to him to keep promises he made to win working-class votes, warned him about coarse, divisive language and criticized him for taking a hard-right turn with his cabinet nominees.

Schumer, leader of the 48-member Democratic caucus, repeated his promise that Democrats would work with Republicans on issues of mutual interest but would fight them as they begin to roll back much of President Barack Obama’s legacy.

“It is not our job to be a rubber stamp. It’s our job to do what’s best for the American people, the middle class and those struggling to get there,” Schumer said.

“What we will always do is hold the president-elect and his Republican colleagues in Congress accountable,” Schumer said.

Armed with senatorial privilege, the need for unanimous consent to expedite proceedings and a filibuster requiring 60 votes to approve legislation and Supreme Court nominees, Schumer’s caucus represents the Democrats’ best and only brake on a unified Republican Congress and White House.

Republicans will win more often than not, Schumer acknowledged tacitly. “But we can raise our voices to present an alternative way forward and we can rally the American people to support those programs,” he said.

Reading from a prepared text, Schumer covered issues including jobs, trade and foreign policy. He said Democrats would hold Trump accountable for benchmarks, such as 5 percent to 6 percent economic growth and a lower unemployment rate.

But the Republican plan to repeal the Affordable Care Act, or Obamacare, and then postpone its replacement for years emerged as a flash point in Tuesday’s Senate speeches.

“The ACA extended health care to 30 million Americans. We ask the president-elect: If you repeal the ACA, what are you going to do to protect these 30 million people?” Schumer said.

“It is not acceptable to repeal the law, throw our health care system into chaos and then leave the hard work for another day,” he said.

Texas Sen. John Cornyn, the No. 2 Senate Republican, confirmed as soon as Schumer sat down that “the first job the new Congress will have is to repeal Obamacare.”

Yet Cornyn also called Schumer “a worthy adversary when we see things differently, which we frequently do, and he is also someone who we can work with.”

Schumer told Trump that he would have a “failed presidency” if he turned over his administration to a cabinet that “is stacked with billionaires, corporate executives, titans of Wall Street and those deeply embedded in Washington’s corridor of power.”

He added, “It seems that many of his campaign themes are being quickly abandoned. He said he was going to unrig the system. So far, it still looks rigged.”