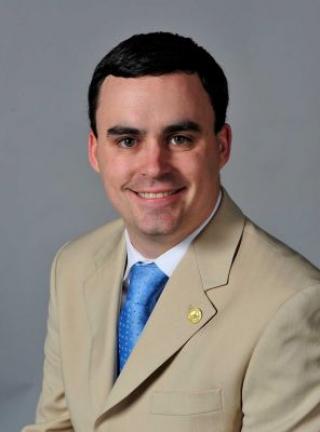 The Brookhaven Democratic Executive Committee Monday night recommended Brian Beedenbender as the party's candidate to replace Town Supervisor Mark Lesko, who is stepping down next month.

The executive committee made the unanimous vote at party headquarters in Setauket after meeting over the weekend with Suffolk Democratic chairman Richard Schaffer and all of the potential candidates.

"Everyone had an interest," said Marc Alessi, town Democratic chairman, who along with Patchogue Mayor Paul Pontieri and town board member Connie Kepert were also potential contenders. "But everyone was inspired by Brian's passion to do the job."

Earlier in the day, County Legis. Edward Romaine, a front-runner for the GOP nomination, announced his candidacy for Brookhaven's top job.

"We cannot have town residents wait weeks to put decks on their homes, have a streetlight fixed or address quality-of-life issues," Romaine said. "As town supervisor, I will consolidate governmental functions, increase accountability, end deficit spending and work to develop waste management alternatives."

The upcoming special election will determine control of the council. The remaining six members include two Democrats, one Conservative and three Republicans, one of whom -- Deputy Supervisor Kathy Walsh -- often votes with Democrats. The vote for Beedenbender, 32, Lesko's chief of staff since January of 2010, was finalized Monday. He previously served a two-year term as a county legislator.

But he lost his re-election bid in a rematch with former Suffolk Police Benevolent Association official Tom Muratore of Ronkonkoma. Beedenbender also served as an aide to former County Executive Steve Levy for more than three years.

Romaine is serving his fourth consecutive term as a county legislator and spent 16 years as Suffolk County clerk. He previously lost a race for county executive against Levy as well as two congressional races.

Jesse Garcia, Brookhaven GOP leader, said "it's immaterial" who the Democrats put forward, but the Republicans "will not put up someone who lost their last election or supported backdoor tax increases."

He said Republicans will "put forward someone with a record of protecting the taxpayers and creating private-sector jobs."

Reached Monday night, Beedenbender dismissed the GOP attacks and welcomed Lesko's support. He acknowledged the town has some fiscal difficulties, but added, "big problems can only be solved if we all get together regardless of party."

Garcia said the party will not officially name a candidate until Lesko leaves office, but the GOP town executive committee is expected to meet no later than Monday to discuss candidates.