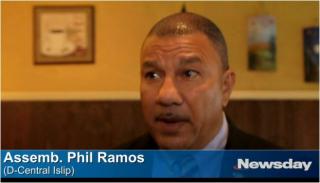 Black and Hispanic leaders vowed to unite for diverse political representation in Suffolk County as they launched a political effort within the Democratic Party Monday.

The newly formed Black and Hispanic Democratic Committee appointed co-chairs to represent the two minority groups and to hold seats in the Democratic committee that decides where to throw the weight of the party in local races.

It's time for black and Latino Democrats to realize that they have common issues at stake, said Assemb. Philip Ramos (D-Brentwood), who spearheaded the group's establishment.

"There is absolutely no difference in the African-American agenda and the Latino agenda," Ramos told more than 30 people meeting in Brentwood. "We ride down, in many cases, the same neglected streets. We have the same issues in our schools. We live in the same neighborhoods that at times are ignored."

Blacks and Latinos make up 25 percent of the county's population, according to 2011 U.S. Census Bureau estimates.

The new committee will interview candidates, endorsing those who align better with its agenda, while tracking progress in local policies and on the diversity of appointments to government posts.

"I believe the Hispanic community is very attracted to the Republican Party because we stand for family, faith and hard work," LaValle said. "We'll run Hispanic candidates for public office and we're moving ahead with legitimate outreach. We are not interested in the facade that the Democrats put up."

Democratic Party insiders, though, said they are taking the initiative very seriously.

Suffolk County Democratic Committee chairman Rich Schaffer said he is "recognizing this group as an official extension" of the party's committee.

County Executive Steve Bellone praised the effort. "There is no doubt that policy follows diversity," Bellone said. "If you have more diverse elected representation, you will get a fairer public policy."

Shirley Coverdale, a black community leader and new committee co-chair, said the group will "make known to anyone . . . who would be an elected official that it is political suicide to ignore us."

Dafny Irizarry, a Latina advocate who is the other co-chair, said the effort will ensure that "we will see a more colorful Suffolk," like its people.