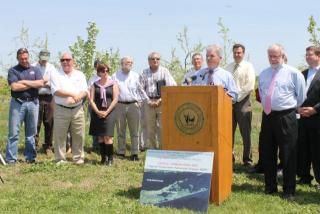 First District Congressman Tim Bishop and Suffolk County Executive Steve Bellone are calling for the L.I. Sound and Peconic Estuary to be designated as a region of critical importance under the U.S. Regional Conservation Partnership Program. The designation would provide the region access to federal funding intended to help farmers adopt conservation practices that will protect the surrounding bodies of water.

The Regional Conservation Partnership Program was funded in the farm bill just passed by Congress, Bishop said. The program will receive $100 million per year over five years, he said.

The money will directly benefit farmers make improvements that benefit the watershed, said Cutchogue farmer Tom Wickham, who hosted the press conference today where Bellone and Bishop made the announcement asking agriculture secretary Tom Vilsack to designate the region under the new program.

Wickham spoke about things farmers need to undertake for both economic sustainability and environmental protection, citing as an example buried fuel tanks that should be replaced with above-ground, double-walled tanks.

Government support can be very important for small farmers, who struggle to make money, Wickham said. These are important not only to help finance improvements to farming but also to give farm families assurance "that there is something out there at the end of the day," he said. Support helps farmers "make the transition from traditional farming to the next level."

"We are a perfect place, a perfect region to receive this designation," Bellone said.

Both the L.I. Sound and the Peconic Estuary are already designated as estuaries of national significance, and there is already an existing coalition of organizations working to preserve and protect the watershed.