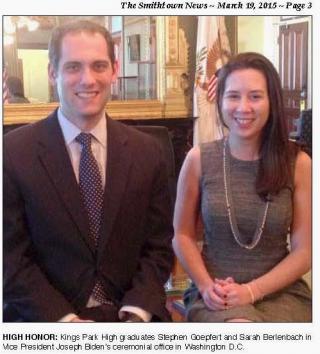 For most Americans, going to work
every day may seem like a chore. But
Kings Park’s Stephen Goepfert and
Sarah Berlenbach don’t really mind
the daily grind. After all, they work
in a pretty nice office building: 1600
Pennsylvania Avenue, Washington
D.C.

Mr. Goepfert, 28, is the Assistant to
the Chief of Staff in the Office of the
Vice President. The title is a mouthful
and the job responsibilities keep the
Kings Park High School graduate
plenty busy. He said the hours are long
and fast-paced and the work he does
to assist Biden chief of staff Ron Klain
is challenging. But Mr. Goepfert is an
individual who thrives on stress and
said even though his job is tough, he
“loves every minute of it.”

“I am lucky to walk through the White
House gates every day,” Mr. Goepfert
said. “Working in the Office of the Vice
President is an incredible honor.”

Growing up in Kings Park, Mr.
Goepfert said he always dreamed
of working in the White House. He
has been interested in politics since
elementary school.

“Now that I’m here, I want to make the
biggest and best contribution I possibly
can,” he said. “The opportunity to help
people was really what drew me in.”

He started in the Office of Presidential
Correspondence in July of 2010 where
he helped to process the thousands of
letters and emails from constituents
across the country.

“My passion for politics has only
grown stronger over the years but
especially since I joined the [Obama]
Administration [five years ago],” he
continued. “Reading their stories
shaped my opinions and political
beliefs, and showed me the real impact
policy-making can have on someone’s
life.”

Even though Mr. Goepfert has since
moved on to bigger and better things
a large part of the correspondence
coming to the White House is still in
very capable hands. Sarah Berlenbach,
23, a fellow graduate of Kings Park
High School in 2009, currently works
alongside Mr. Goepfert as the Associate
Director of Correspondence for Mr.
Biden.

“It’s an honor,” she said. “It feels good
to come to work every day working for
something and someone you really
believe in.”

Ms. Berlenbach said she feels as
though she represents her little part
of the world at the White House: her
friends, her family, and her hometown
community of Fort Salonga and by
extension, Kings Park.

Mr. Goepfert has deep roots in
Kings Park. His family moved to the
close-knit Smithtown community in
1992, when Stephen was enrolled as a
first-grader at Park View Elementary.
After graduating from Kings Park High
School in 2004, Mr. Goepfert attended
George Washington University, where
he studied political science. In 2008,
he joined up with the presidential
campaign for then-Senator Barack
Obama in the swing state of New
Hampshire, where he served as a
Field Organizer. He remained with
the Obama campaign during the
Democratic primary and through the
general election. After President Obama
was elected, Mr. Goepfert moved back
to Kings Park in 2009 and joined the
Smithtown Democratic Committee.
Committee Chairman Ed Maher said
Mr. Goepfert has been a wonderful
member and a valuable addition to
his team, adding that he is incredibly
proud of Mr. Goepfert for landing a job
at the White House working for Vice
President Biden.

“Being a Democrat in Smithtown
isn’t easy,” Mr. Goepfert said, alluding
to the Town’s voter demographics as
a prominent Republican stronghold
for Long Island. “However, these
committee members are some of the
most passionate and dedicated people
that I’ve ever met, and that’s coming
from someone who spent a lot of
time with volunteers during the 2008
campaign in New Hampshire.”

Like countless members of her
generation from across the country,
Ms. Berlenbach got involved in politics
during President Obama’s 2008
presidential campaign, volunteering at
a phone bank and knocking on doors.

“Although I felt invincible as a young
person—thinking that politics didn’t
shape my world—the months leading
up to November 4, 2008 put things in
perspective,” she said, referring to the
day President Obama was first elected.
“[It] made me realize how much things
like health-care costs mattered to my
middle-class family and community.”

After graduating from Kings Park,” Ms.
Berlenbach attended The University of
North Carolina at Chapel Hill, spending
time as a Summer Organizing Fellow
for Organizing for America (OFA)-New
York, the Obama re-election campaign’s
New York arm. The position helped land
her a spot in the coveted White House
Internship Program. During a visit
back home to Fort Salonga, she joined
the Smithtown Democratic Committee,
an organization she raved about for
its commitment to helping people at a
grassroots level.

“My passion for politics has only
grown stronger over the years but
especially since I joined the [Obama]
Administration [five years ago],”
Mr. Goepfert said. “Reading [the
constituents’] stories shaped my
opinions and political beliefs and
showed me the real impact policymaking
can have on someone’s life.”

Although the two members of Mr.
Biden’s staff are kept pretty busy, Mr.
Goepfert said he tries to come home
and visit Kings Park whenever he
can to visit his family, whom he said
still lives in town for the most part.
Ms. Berlenbach has bounced around
from Long Island to North Carolina to
New York City and now Washington
D.C. over the last few years but said
that although she enjoys her time in
the nation’s capital, Fort Salonga and
Kings Park will always be her home.