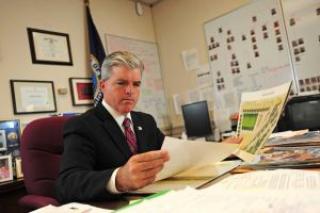 Steve Bellone, Babylon Town supervisor and the Democratic nominee for Suffolk County executive, Monday unveiled the framework for his economic plan for the county, which he hopes to turn into a research powerhouse.

Bellone cited the challenges facing the county: not enough high-paying jobs, not enough diverse housing, high costs and young people leaving. "These four challenges are feeding off of one another and strengthening each other in a way that poses long-term systemic risk for our economy," he said.

Suffolk, he said, has "all the ingredients needed" to become the country's next Research Triangle, the successful high-tech hub in North Carolina. To accomplish this, Bellone would create "innovation zones" with the "lowest tax rates on businesses Long Island has ever seen." The county would identify parcels not currently on the tax rolls and offer businesses incentives to set up there, he said.

Bellone also wants to strengthen the county's Industrial Development Agency. He proposed creating a pool of $500,000 from money "languishing" in town IDA reserve funds to create a Suffolk Innovation and Research Fund to provide start-up capital for businesses.

Saying that the "biggest impediment to economic development on Long Island is government," Bellone proposed streamlining the process, including speeding the granting of permits by the county health department.

"We almost seem to have the attitude here on Long Island that whenever it happens, it happens," Bellone said. "This is not going to make us competitive with other regions."

Bellone unveiled his plan at Advanced Energy Systems Inc. in Medford, the kind of growing high-tech business he said Suffolk should be doing more to attract."This could be very powerful for us," company president Anthony Favale said. "We need the help to compete with other areas of the country."

Asked for a response to Bellone's plan, Rick Belyea, campaign manager for Republican opponent Angie Carpenter, cited recent figures from the state Department ofLabor showing Babylon with the highest unemployment rate in the county at 8.1 percent. "He hasn't figured out how to maintain jobs in his own town," Belyea said.

Bellone said such comments show a "lack of understanding of how our regional economy works." Bellone's campaign says since he became supervisor in 2002, there have been 9,200 jobs created or retained as a result of deals by the Babylon IDA, with more than $500 million of private investment in the town.