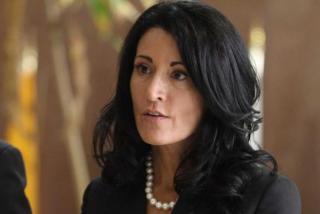 Suffolk County Executive-elect Steve Bellone has chosen corporate fraud attorney Regina Calcaterra, who as a child lived in homeless shelters and foster homes in the county, as his chief deputy.

Calcaterra, 44, co-director of Bellone's transition team and an unsuccessful candidate for state senate last year, would be the first woman to hold the top post. She accepted the job earlier this week.

"I wanted to be part of the team to change Suffolk . . . government for the better," she said. "This is a government that raised me. I know the role government plays in people's lives."

Bellone said he chose Calcaterra after seeing her in action during the transition. "After the 15th memo detailing every step before we take over, I decided this is the person who would be perfect," Bellone said.

One of five children, Calcaterra, of New Suffolk, lived in shelters and foster homes. Her mother suffered from drug and alcohol abuse, and at age 14 Calcaterra petitioned a court for emancipation so she could stay in one school to graduate.

Calcaterra is managing partner of the New York office of Barrack, Rodos & Bacine, a 55-attorney firm. Previously, she served as deputy general counsel to the New York City retirement system and as a lobbyist for former New York City Comptroller Alan Hevesi.

Calcaterra ran in 2010 for state Senate against GOP incumbent Kenneth LaValle. She was knocked off the ballot when a court ruled she had not been a state resident for the required five years immediately before her candidacy. While she was raised in Centereach and lived in New York City for many years, for parts of 2005 and 2006 Calcaterra voted, maintained her bank account and filed income taxes in Pennsylvania.

"She played an integral role in setting up those meetings," said Joe Gergela, executive director of the Long Island Farm Bureau. "She's bright, she's balanced and she gets it on the issues that concern us."