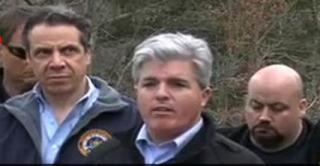 County Executive Steve Bellone announced Tuesday afternoon that the brush fires in Suffolk have been largely contained. Both Bellone and Governor Andrew Cuomo thanked firefighters for their efforts in battling the blaze, which they said could have been “a lot worse.” The Governor also declared a state of emergency for Suffolk County in order to put it in a position to receive financial assistance.