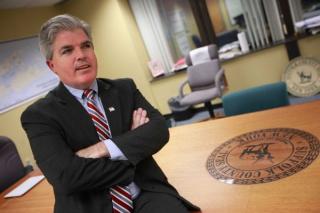 Democratic County Executive Steve Bellone Thursday proposed the merger of Suffolk's treasurer and comptroller's offices, both of which are run by elected Republicans, saying it would save $1 million a year.

He said he will ask the county legislature to place a referendum on the November ballot to authorize the merger. If the referendum passes, Bellone would appoint an interim chief financial officer to run the new office throughout 2014, and an elected leader would begin a four-year term on Jan. 1, 2015. Suffolk is the last of New York's 62 counties to still elect a treasurer and comptroller.

"We continue to talk about the fact we're in a financial crisis, so we need to restructure government," Bellone said. "If we can't do this, we might as well stop talking about government efficiency."

Bellone said his proposal "isn't about politics. This is about protecting taxpayers."

Joseph Sawicki, a former state assemblyman, has been comptroller since 2003, and term limits prohibit him from running again at the end of 2014. Angie Carpenter, a former county legislator who lost to Bellone in the 2011 county executive's race, in which she ran as a Republican, has been treasurer since 2006. She is seeking re-election this fall with Democratic endorsement.

Bellone has not introduced referendum legislation, and it was unclear Thursday what roles Sawicki and Carpenter would play throughout 2014. Each earns $175,000.

Carpenter complained administration officials never visited to study her operations: "How can you make a judgment call with these ramifications without doing your due diligence?"

Sawicki said he generally supports consolidations, but expressed concern about the executive's ability to appoint an interim head of the new office. "That undermines the integrity and independence of [the comptroller's] office, the fiscal watchdog of the county," Sawicki said.

Deputy Presiding Officer Wayne Horsley (D-Babylon) said the expected cost savings and allowing voters to decide could sway legislators. "This actually takes the politics out of it," Horsley said.

But Legis. Tom Cilmi (R-East Islip) said he has seen no proof of savings from Bellone's consolidation of the labor and consumer affairs and economic development and planning departments last year. "I'm going to have to be convinced that there's in fact substantial savings, and that we don't lose any accountability as a result," he said. "With the previous consolidations, I'm not sure I've seen reductions in upper management. “Former County Executive Steve Levy proposed merging the offices in 2006, but legislators blocked him, claiming that a consolidated office would not be independent.

The comptroller audits county spending and issues bonds. The office has a $5.6 million budget this year and about 67 employees. The treasurer oversees about 600,000 county tax parcel records and collects delinquent taxes. She has 43 workers and a $4.3 million budget.