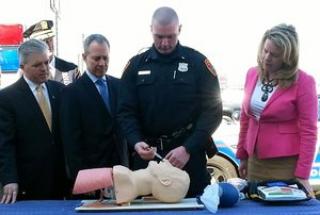 "As heroin use continues to rise in Suffolk County, we need to engage in a multi-pronged approach to address the epidemic,” County Executive Bellone said. “I thank Attorney General Schneiderman for securing funding to purchase Naloxone for all law enforcement in the State and ensuring that all personnel will be trained in the administration of naloxone to assist municipalities in tackling widespread heroin use.”

“Heroin is destroying our communities, and it’s time we looked at broader solutions to fight back,” Attorney General Schneiderman said. “Naloxone is stunningly effective at stopping an overdose in its tracks, and putting this powerful antidote in the hands of every law-enforcement agent in the state will save countless lives.”

Opioids, such as heroin, affix themselves to opioid receptors in the body, which relaxes the body and slows breathing, sometimes to a complete stop. Naloxone also attaches to opioid receptors, blocking the opioids from binding to receptors and preventing these potentially fatal effects on the respiratory system.

The COP program will equip all law enforcement officers in New York with naloxone and train them to recognize the symptoms of an opioid overdose and administer the antidote.

In 2012, Suffolk County introduced a pilot program to train and equip EMT’s with naloxone. The program was expanded later that same year, through legislation by Legislator Kara Hahn, to include Suffolk County police officers.

Legislator Hahn also sponsored two other pieces of legislation related to overdose prevention; the first to register the Suffolk County Department of Health Services as an Opioid Overdose Prevention Program, allowing health officials to teach laypersons how to recognize an opioid overdose and reverse its effects by administering naloxone and the second directing the same department to reach out to the individuals saved by naloxone and offer them treatment referrals and options.

"The casualties in the war against addiction are our fathers, mothers, sons and daughters," said Legislator Hahn. "Here in Suffolk County we have proven that Narcan in the hands of our first responders saves lives. Today, thanks to the Attorney General's efforts, the rest of New York will soon have access to this tool that has already rescued so many Suffolk County residents, many of whom took the second chance they were given by Narcan to beat their addictions and reclaim their lives. It is a fitting and ironic twist that drug dealers’ ill-gotten gains will ultimately be used to save the very lives of their victims as the COP program expands the reach of this overdose antidote.”

Police personnel and EMTs in Suffolk County administered naloxone 594 times in 2013 alone, saving the lives of 563 people who would have otherwise overdosed.

According to the Attorney General’s office, COP will be funded by $5 million in joint federal-state criminal and civil forfeiture money, enough to train and equip every law enforcement officer in the state with a naloxone kit. Each naloxone kit contains two prefilled syringes of naloxone, two atomizers for nasal administration, sterile gloves, and a booklet on the use of the drug. The cost of a naloxone kit is approximately $60 and the shelf life of each kit is approximately two years.