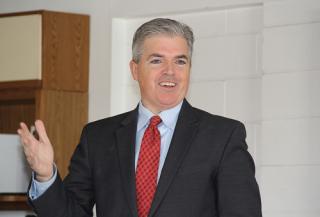 County Executive Steve Bellone is in the process of forming a working group that will be tasked with pushing a vision for a skilled agricultural work force that’s trained and educated right here in Suffolk County.

The idea arose during a meeting Mr. Bellone had with farmers last week at Ivy Acres nurseries in Calverton under the notion that high school and college students shouldn’t have to travel far to study for jobs that are available in an industry already well-established in the county.

“We’re the largest agricultural county within the state in terms of sales and yet we have no real formal training opportunities [in agriculture] in this county,” Mr. Bellone said. “Our young people are forced to go upstate and to other places — and that shouldn’t be. It’s something we need to correct.”

Joseph Gergela, executive director of the Long Island Farm Bureau, said there are ample job opportunities associated with agriculture within the county; however, students may not be aware these jobs even exist because related educational programs are not available locally.

Ideally, agriculture programs would be offered to students at institutions like BOCES or Suffolk County Community College, and even private colleges like Dowling, Mr. Bellone said.

As the industry’s irrigation and harvesting practices continue to evolve and use increasingly mechanical means of crop management, more jobs are opening up for plumbers, contractors and mechanical engineers, said Mr. Gergela, who first floated the idea at last week’s meeting with Mr. Bellone.

With the right training or schooling, he said, local youth could help fill gaps in the industry’s labor shortages. Positions in finance and bookkeeping will also become needed over time, as federal regulations like the Food Safety Modernization Act and any pesticide application requirements come into effect, he said.

And with regional climate changes anticipated, more researchers will be needed to inform growers about how best to adapt to temperature fluctuations, said Vito Minei, executive director of Cornell Cooperative Extension of Suffolk County.

“I don’t think it’s well-known outside of the East End community that these opportunities are here,” said Mr. Minei, who attended last week’s meeting. “All of them will be needed for the agricultural industry to advance. The question is [whether] can you make them well-paying jobs — which has always been a huge hurdle — and can we make the kids aware of them.”

“Years ago, the machines and the tractors were much more simple,” Mr. Gergela said. “Now you have to go to school to be educated on these and we need people who can manage them.”

In addition to offering programs at local colleges, Mr. Gergela said, he envisions offering a mentor program to students during their sophomore or junior years of high school that would give them a taste of the different facets of working in agriculture — “to see if anything sticks,” he said.

From there, students could pursue an education in agriculture through BOCES, SCCC, Stony Brook University or other local institutions, he said.

Recent U.S. Department of Agriculture data has shown that children raised in farming families are increasingly coming back to the industry as they enter the work force. There is also added interest from young people who have not grown up in a farming environment.

Now is the time to take advantage of that interest, Mr. Gergela said.

Mr. Bellone said the working group will be spearheaded by members of the county Department of Economic Development and Planning and will include a diverse group of stakeholders in farming, as well as representatives from colleges, universities and community organizations from within the county.

“We have a brain drain when it comes to the next generation,” he said. “We need to be sure farming remains a viable part of our future in Suffolk County.”