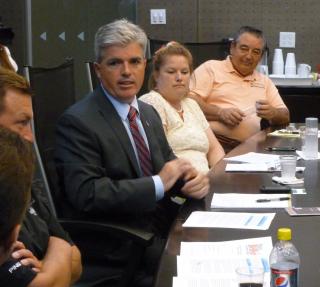 BABYLON – Babylon Town Supervisor and Democratic Suffolk County Executive Candidate Steve Bellone today announced his plan to prioritize economic growth during a roundtable discussion at EVO Merchant Services in Melville. Business leaders joined Bellone for the announcement and a discussion to share their experiences working with town and county government.

Bellone’s plan, building on the Innovate Suffolk economic vision he released last week, calls on the creation of a Regional Economic Development plan to promote better coordination among town Industrial Development Agencies; reforming the County Health Department; promoting efficiency at all levels of government; and expanding job training programs to work with both universities and private sector employers as well as state and federal government.

“Unfortunately many businesses, like some that gathered here today, have found that government has been the biggest barrier to their economic growth,” said Bellone. “We can create jobs, provide opportunity and expand our tax base to give relief to middle class families so long as we transform government to prioritize economic growth and allow my Innovate Suffolk economic platform to take root.”

“Steve Bellone has put together a smart plan to transform county government to become an active partner in creating jobs,” said Nick Liberatoscioli. “He has made clear with his record in Babylon that he prioritizes jobs over red-tape and his plan makes economic growth the number one priority of county government.”

More information on Bellone’s plan to transform government to prioritize economic growth can be found by downloading the attached .pdf file below.