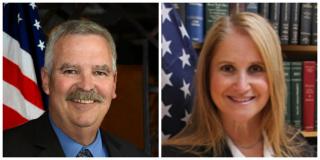 Out of 1,356 eligible voters, Barrett, a Melville resident who works in the town’s general services department, received 205 votes, or 47.1 percent, followed by Berland, who received 113 votes, or 30.6 percent. Of the other candidates on the ballot, Charles Marino came closest, with 91 votes, or 21 percent of the turnout. Richard R. Hall received four votes, followed by Valerie Stringfellow, who got two votes.

The Conservative Party backed Michael Helfer for a run at the seat, and also endorsed Cook’s nomination.

As of Tuesday, the results were unofficial did not include absentee ballots and affidavits, according to the Suffolk County Board of Elections.