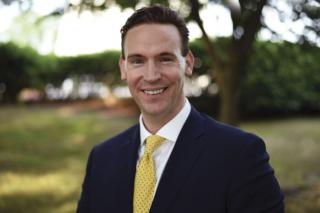 Harrington, 34, who grew up in Sound Beach and was a student in the Miller Place school district before graduating from Georgetown University’s School of Foreign Service and Yale Law School, is the official nominee of the Democratic, Working Families, and Women’s Equality parties. In November, he will run against Town Supervisor Ed Romaine (R), who has held the position since 2012 and is pursuing his third term at the helm.

As the father of a 2-year-old son, with another child on the way with his wife Sarah, Harrington said his main motivation to run was to make sure his kids have as many opportunities to succeed as he had growing up in the town in the 1980s and 90s.
But, Harrington expressed, a lot has changed in Suffolk County since then, and not for the better.

“It’s getting harder and harder for middle class families to survive in this area and I think local government plays a large role in that,” Harrington said.

Since deciding to run in May, he spends two hours a day going door-to-door to speak with residents about issues they have.

“It’s getting increasingly difficult to find a job and increasingly difficult to enter the property market,” he said. “I’m worried that if we don’t elect leaders that have a long-term vision for what Brookhaven should look like, when my son graduates college and if he decides he wants to stay in the town, he’s not going to have the means to do so.”

The candidate said he wants to grow Brookhaven’s economy by promoting transit-oriented development, high-tech corridors and vibrant downtowns in line with Patchogue Village and the planned revitalization project in Port Jefferson Station.

According to Harrington, Suffolk County should be utilizing its research hubs like Brookhaven National Lab and Stony Brook University, where he has taught as an adjunct professor of business, to bring back jobs.

He also wants to create alternative housing options for young people and seniors, and help make Town Hall a better overall partner to local businesses and residents by cutting through the “bureaucratic red tape” many have complained to him about.

“If I’m elected, one of the first things I want to do is evaluate every program, office, person in Town Hall that interacts with businesses in any shape or form and ask a very simple question: how can we make these interactions easier? How can we reduce wait times?” Harrington said. “I want to ensure that every resident in Brookhaven has an ironclad belief that their government is working on behalf of their interest and their interest alone.”

He said he plans on releasing a package of tough ethics and contracting reforms that include term limits, a database for residents to see exactly where their taxpayer dollars are going, and public financial disclosures of elected officials.

Harrington commended the town on its initiatives to preserve open space, and made it clear he is actively running, but not waging a personal campaign against Romaine, who was unable to be reached for comment.

Raised by a public school teacher and a restaurateur, Harrington grew up valuing education and hard work. Upon receiving a full academic scholarship to Phillips Academy in Andover, Massachusetts, he attended University of St Andrews in Scotland, where he received a bachelor’s degree in international relations, and managed initiatives at The Center for the Study of Terrorism and Political Violence.

He then pursued international security studies at Georgetown University. After taking time to work in Washington, D.C. as a counter-terrorism and intelligence analyst, he began studying law at Yale, from which he graduated in 2010.

In between passing the New York State bar examination and entering private practice in Stony Brook, Harrington interned for President Barack Obama (D) in the White House Counsel’s Office — an experience he said was remarkable.

“The hours were long, but they’re gratifying,” he said, “and if you don’t get chills walking into the Roosevelt Room for the staff meeting five feet from the Oval Office, then you might have other problems.”

When he and his wife moved back to Long Island to settle down, Harrington decided to join the Navy Reserve, serving for almost four years, and become locally active.

“He has a real dedication and commitment to his community,” said Lillian Clayman, chairwoman of the Brookhaven Town Democratic Committee, which is where she first met Harrington. “He cares deeply about his family and he’s very conscious of his role as husband and father, and is active in his church. I had approached him and asked if he considered running for office because he’s just the kind of quality young person that Brookhaven needs. I think he’s going to win.”