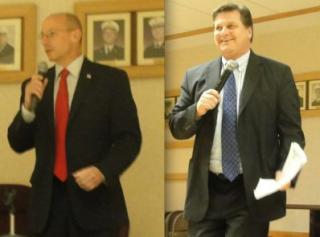 Republican Assemb. Dean Murray led challenger Ed Hennessey by 36 votes on election night, but a recount has turned the tables and Hennessey, a former Brookhaven Town councilman is now headed to Albany.

Officials confirmed that Murray, of Patchogue, conceded the 3rd Assembly District race to Hennessey after a second day of recanvassing Thursday put the Democrat on top.

Newsday reported that Hennessey, a lawyer, won by 226 votes when all the ballots were counted Friday.

Murray, who took office in 2010 after winning a special election and won a full two year term later that year, posted a note on his Facebook page Friday morning thanking his supporters.

"It has truly been an honor and a privilege to serve the residents of the 3rd Assembly District over the past 3 years, but it appears that it wasn't in the cards for me to continue doing so. Thank you once again for all of your support!" he wrote.