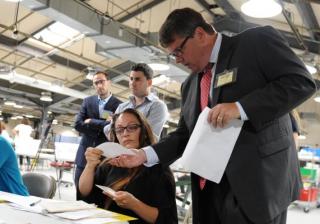 Elections official did not have a final vote tally, but both sides put aside their objections when Throne-Holst’s margin exceeded what remained of 1,800 absentee ballots that were being counted.

Throne-Holst, in a statement, thanked supporters and “congratulated David Calone on a spirited race” which resulted in “a very close margin.”

She said she “looks forward to working together with Democrats across the district to take back this important seat. Lee Zeldin has shown in every way how out of step and wrong he is, ‘not only for Long Island, but for the country.

Zeldin’s campaign issued a statement attacking the “shameful narrative” with which “Democrats have been desperately attempting to deceive voters” about his record.

“First Congressional District voters are smart enough to sort fact from fiction and reject all of the false, negative and partisan attacks on our Congressman,” the statement said. “Congressman Zeldin will continue to pursue his New Era of American Strength agenda to protect America’s security at home and abroad, help grow our economy, support our veterans and first responders.”