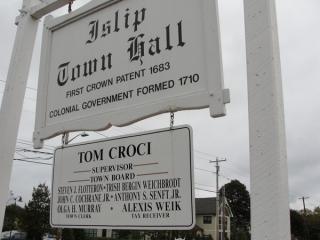 “This is not what we want to do, and this has been the most difficult year of our lives,” said Supervisor Croci. “This is the bitter reality of America these days. I’d like to have a town with a hatchery, a harbor police and a nature center, and I think residents deserve that. Unfortunately the financial situation we’ve inherited does not allow us this luxury. When we proposed our initial 65-percent tax increase, the citizens were frank about what services they wanted, needed and what were just ‘nice to have.’ The one’s that fell under ‘nice to have’ were those things that we had to put under careful consideration.”

Town funding for the Nature Center, amounting to $82,400 per year, is set to cease on Jan. 1, although officials stressed that the center is not closing down and that it will not be developed. Councilwoman Trish Bergin-Weichbrodt stated that she and Councilman Anthony Senft would be meeting with private agencies, including the Nature Conservancy in East Hampton, to try to work out a public/private partnership.

But the public was still unhappy with the move, and criticized the board for not openly deliberating with Nature Center Associates, especially 23-year Director Alison Tews, before making the move.

“Shame on you for considering such a thing,” said Oakdale resident Thomas Doncourt in regard to the elimination of funds to the Nature Center. “The center has seen its way through hard times before, and it’s supposed to be here for the grandkids of the town you serve. There may be no development now, but it could end up happening further on down the line. How can we trust you?”

“If it’s true that the board made this move without including Alison Tews in the discussions, then I’m very disappointed,” said West Islip resident Steve Fratello. “I hope that from here on you will do your utmost to provide at least some funds for the Nature Center.”

Speakers asked the town to facilitate open discussion with the community to find a way to keep the Nature Center as it is.

“Let’s open the doors for communication here and explore other opportunities,” said Tews. “We need unified management, and we can find a way to make this work if we all work together.”

Also present was Elizabeth Decker Orr, whose father donated the Center to the Town in the 1970s.

“Cutting the Nature Center from the budget and evicting the resident naturalist before the end of the year with nothing concrete in place was not good planning,” said Orr, who traveled from Maryland to speak. “The town was trusted from the beginning to do all it could to maintain and continue the Center as it was intended. If the town had put together an advisory board like it was originally supposed to when the Center was created, this wouldn’t have happened. $82,000 is not a lot of money to raise. If you put together a board, you can fix this problem.”

“We’re diligently working to come up with a way to preserve and allow the public to enjoy the center without putting a burden on the taxpayer,” added Croci. “If there’s a way we can work with the wider community and make that happen, then we’ll make it work.”

A few residents also spoke in support of the Town’s Shellfish Hatchery, citing the deep history of the local industry and the current high level of demand for Long Island Oysters. Officials also stated that they also intended to form a public-private co-op to keep the hatchery operational.

“It’s important both for the bay and as an income source for the town,” said Councilman John Cochrane. “We’re trying to get the hatchery back in working order again [following damage from Sandy] and put an RFP out so we can form a public-private partnership and go to the next phase.”

A handful of Bay Constables and supporters spoke in defense of the Harbor Police, detailing its crucial role in keeping bay a safe place for boaters. However, the board offered no plans to halt the department’s elimination and the termination of its employees.
East Islip resident Brandon Ramunto actually gave an account of an incident when two Bay Constables, Mike Handelman and Jonathan Nentzel, saved his life.

“I was surfing on Fire Island when I lost my board and got caught in a rip current,” said Ramunto. “I was sucked into the inlet and was fortunate enough to grab onto a buoy. I saw boats in the distance, but no one would come near me because the conditions were so bad. After waiting for three hours, I saw them coming fearlessly into the inlet. I saw their boat go vertical and almost tip three times. They risked their lives for me, and I wouldn’t be here today if it wasn’t for them. Please reconsider your decision, because the waters will be a lot more dangerous.”

In other business, Croci signed an Emergency Order addressing post-Sandy reconstruction provisions across Islip Township aimed at lightening the load for disaster struck property owners. The new measure allows affected property owners of substandard/non-conforming parcels the right to rebuild their damaged structures without seeking a variance or relief from the Zoning Board of Appeals.

The board also awarded NYPD Officer Larry DePrimo a citation of honor and merit for when he purchased a pair of thermal socks and winter boots for a homeless man on Nov. 14.

“Officer DePrimo has reminded us to treat our fellow neighbors with respect and kindness,” said Croci. “We must not forget that examples of compassion are rare and should be publicly recognized. The town board and I are proud and honored to have Officer DePrimo in our community, and we look forward to his future accomplishments.”

“I just really wanted to say thank you for allowing me to accept such a great award,” said DePrimo. “I almost feel undeserving of so much thanks. I hope during these tough times we can all pull through and help each other out.”
The next Town Board Meeting is scheduled to take place on Tuesday, Jan. 8 at 2 p.m.