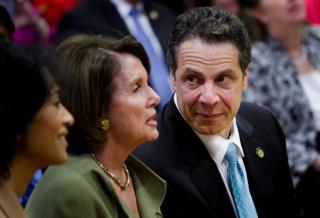 Gov. Andrew M. Cuomo and House Democratic Leader Nancy Pelosi announced Tuesday they would target Republican members of Congress from New York in an effort to help Democrats retake the U.S. House in 2018.

“New York will be on the front lines of our fight to restore sanity to Washington,” Pelosi said at a rally before hundreds of union members at the Javits Center in Manhattan, where she and Cuomo unveiled the New York Fights Back campaign.

The effort comes as Democrats look to next year’s midterm election as an opportunity to take control of the GOP-led House. Democrats need to flip 24 Republican held seats to gain a majority.

Rep. Lee Zeldin (R-Shirley), who represents the 1st Congressional District in Suffolk County, is among the six state Republicans the campaign is targeting because of his vote to repeal the Affordable Care Act, according to the New York Fights Back website.

Zeldin, reached for comment, said Cuomo was “seeking to divide our great state as well as New York’s strong, bipartisan congressional delegation for the purpose of promoting his own self-serving partisan political cravings.”

Cuomo, whose name is often floated as a possible 2020 presidential contender, told rally-goers that House Republicans had forgotten the needs of middle class New Yorkers, especially by voting to repeal the Affordable Care Act.

“These are not moderate, responsible public officials; they’re not taking reasonable positions; these are political pawns to the ultraconservative puppet masters in Washington,” Cuomo said.

“Pelosi’s out-of-touch liberal agenda is upside-down with independent voters, and her failed leadership has resulted in one disastrous election cycle after another for House Democrats,” said NRCC spokesman Chris Martin.