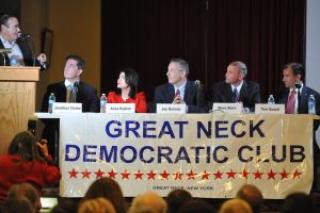 The race is so crowded that even experts are shying way from predictions.

The field consists of a former Nassau county executive; a term-limited Suffolk County legislator; a former town supervisor; a town board member and an attorney who backs Bernie Sanders for president and on principle is spending as little as possible on the race.

Whoever wins is expected to face a formidable foe in Republican state Sen. Jack Martins, a former mayor of Mineola.

Among the crosscurrents is the June 28 primary date, which was mandated by federal court order to assure that those in the military can vote. Party activists had been used to New York’s September primary date, and they say holding the vote on Tuesday could depress the 5 to 15 percent turnout a primary normally draws.

“There are too just too many crosscurrents to make any prediction,” said Richard Schaffer, Suffolk Democratic chairman. “School’s out, it’s summer and people are on vacation. The last thing on people’s minds is Congress, a body they don’t think much of to begin with.”

With four of the five contenders from Nassau it is unclear how each might cut into their opponents’ support among the 50 percent of district voters who live in the county — or how any of the candidates will fare with the 30 percent in Suffolk, and the 20 percent in Queens.

Adding to the uncertainty is the fact that there is little difference between candidates on issues. All back stronger gun control laws, strong ties with the state of Israel, funding for Planned Parenthood, equal pay for women and abortion rights.

Here’s a rundown on each of the Democratic congressional contenders:

Suozzi, 53, of Glen Cove, is well known after serving eight years as Nassau County executive. He also is the only contender with extensive primary experience, having won two county executive primaries and lost one for governor.

Suozzi, who lost his last two county executive races, acknowledges that while he may be the best known of the contenders, he also has the highest negatives.

Suozzi, a former Glen Cove mayor who is a lawyer and CPA, says three years out of office has given him a new perspective for his comeback bid.

“The world has changed and we spend too much time yelling at each other about problems, instead if getting people of good will together to solve the problems,” he said. “I have a proven record taking on the tough fights even if I get squashed in the process.”

Suozzi, who is married with three children, says his record of repairing Nassau’s finances, launching a “Fix Albany” to root out corruption and proposing a property tax cap and Medicaid relief show he has the best credentials to fight for change.

His most recent filing with the Federal Election Commission which shows him as the fundraising leader, having spent $347,000 and with still $312,000 on hand for the final push before the primary.

Stern, 47, of Dix Hills, is an 11-year Suffolk County legislator who has the strong backing of Israel, who joined Stern in a TV ad and handed off his political staff to Stern for the primary race. Stern also is backed by the powerful health care workers union SEIU 1199, Huntington Town Supervisor Frank Petrone and Schaffer.

An elder law attorney, Stern touts his sponsorship of county legislation to ban protests at military funerals and the use of the chemical BPA in baby bottles and toddler cups. He cites another measure that created a program to rehabilitate homes taken for unpaid taxes to help homeless veterans.

Stern says that in campaigning door-to-door, he has encountered a “strong percentage” of people who want campaign finance reform, and he is backing a local Suffolk bill to put public campaign financing in place.

“The Citizens United case is an absolute disgrace and the people are sick and tired of it, and I’m willing to put my vote where my mouth is.” The U.S. Supreme Court decision in 2000 said political spending is protected under the First Amendment, meaning that corporations and unions can spend unlimited amounts of money on political activities, as long as they act independently of a party or candidate.

Stern, who is term-limited from seeking re-election to the county legislature next year, is married with two sons.

Kaplan hopes to become the first Iranian-American in Congress, and is using her story of coming to the United States alone as a 13-year-old Iranian Jewish refugee in a TV ad that attacks Republican Donald Trump’s immigration policies.

Kaplan, 49 of Great Neck, works full time as a North Hempstead town board member. She was first elected in 2011 and is in her second term. Earlier, Kaplan was a trustee of the Great Neck Public Library and a member of the North Hempstead Zoning Board of Appeals.

“From what I hear from people in the district, their concern is about affordability,” said Kaplan. “Being able to afford their lifestyle . . . and afford an education for their children and grandchildren.”

She has the backing of EMILY’S List and is benefiting from eight mailings from its independent expenditure arm, WOMEN VOTE! She has spent $471,000, and has $106,000 left.

Kaplan graduated from Stern College for Women at Yeshiva University and Benjamin Cardozo School of Law. She is married with two daughters.

Kaiman, 53, of Great Neck, served as point man for Gov. Andrew M. Cuomo for superstorm Sandy relief and as chairman of the Nassau Interim Financial Authority, but resigned both posts to run for Congress.

Kaiman says that, if elected, he will press to make Project Independence, a town program that helps seniors remain in their homes with services including rides, repairs and health care, into a national program.

“I understand how government works,” said Kaiman. “And I know how to take the lead on major projects and come up . . . with programs that will save money and make a difference in people’s lives.”

Kaiman said the $118,000 income cap for Social Security taxation should be raised, and that Americans should be able to buy into Medicare at age 55.

He is married with three children.

Clarke, 39, of Jericho, said he is purposely running a shoestring campaign — his average donation is $10 — to show a candidate can “do well” without massive fundraising.

A lawyer who supports Vermont Sen. Bernie Sanders for president, Clarke says he has a hard time affording to live in the district and has a “Ferrari’s worth” of college debt. He said he will press to narrow income disparity, if elected.

“We have the greatest gap in income since the Great Depression,” he said. “Some in the district may not like it but we have to raise taxes on the wealthiest individuals.”

Clarke earlier ran losing races for the Nassau County legislature and state Assembly. He worked as a market research analyst for five years with NPD Group in Port Washington, and later drove a taxi while attending Touro Law School, from which he graduated in 2012. He has a general law practice and does pro bono work for animal rights organizations.

Because of limited fundraising, Clarke is not required to file a campaign finance report. He said he has raised $4,865 and has about $2,000 on hand.

Clarke is divorced with no children.