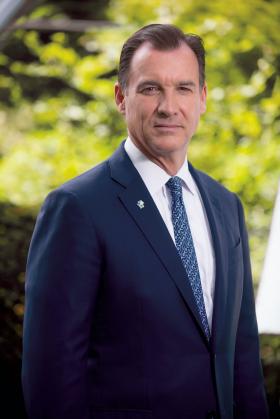 Tom Suozzi, a CPA and attorney, has served as mayor of his hometown, Glen Cove, NY from 1994-2001 and as Nassau County Executive from 2002-2009. Prior to Suozzi taking office, Nassau County was on the brink of bankruptcy and declared the “worst run county in America” by the Maxwell School at Syracuse University. Suozzi successfully steered Nassau back from financial collapse and restored it to fiscal stability. In 2005, he was honored as Governing Magazine’s “Public Official of the Year.”

As a reformer and someone eager to take on the tough battles, in 2004 Suozzi created FixAlbany.com in order to expose and root out corruption in New York state politics and get a cap on local Medicaid expenses. In 2007, he was appointed to lead a state commission that proposed the first property tax cap, which has now become law. In 2008, the New York State League of Conservation Voters (NYLCV) named him “Environmentalist of the Year.”

Suozzi has worked as a senior advisor to investment banking firm Lazard and is currently of counsel at Harris Beach law firm. Prior to his time in elected office Suozzi worked as a litigator for Shearman & Sterling, law clerk to the Chief Judge of the Eastern District, and an auditor for Arthur Andersen & Co. He resides in Glen Cove with his wife Helene and three children.