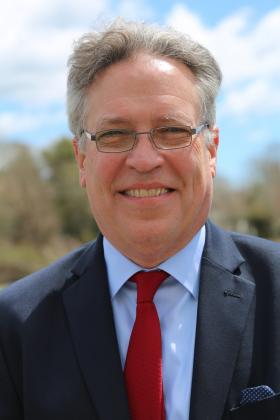 Traffic expert Tom Neely was born and raised in Pittsburgh, Pa. After attending college in Ohio and working for several years in New York City and Boston, he moved to the South Fork in 1987.

From 1987 to 2004, Tom was a Vice President at Hampton Jitney, a multi-faceted transportation company serving Long Island, New York City, and markets all along the east coast. While working at the Jitney, Tom served as President of the Southampton Chamber of Commerce and on the Sag Harbor Chamber Board; was appointed by the Town Board to the Southampton Town Comprehensive Plan Committee, Transportation Advisory Task Force; and Town Business Advisory Council. During his free time he coached his sons in soccer and Little League in Sag Harbor.

In 2005, Tom was appointed Southampton Town Director of Intermodal Transportation and Traffic Safety. In that position, he has served as Executive Director of the Town Transportation Commission and as Chair of the East End Transportation Council. Tom has been deeply involved in a variety of regional and Town transportation, traffic, and roadway projects; successfully working with residents, Town departments, outside agencies and other east end municipalities.

Repairing and maintaining the roads is only part of the Highway Superintendent's job. Today, managing traffic is absolutely crucial to our community's welfare, and that's where we need Tom Neely's know-how.