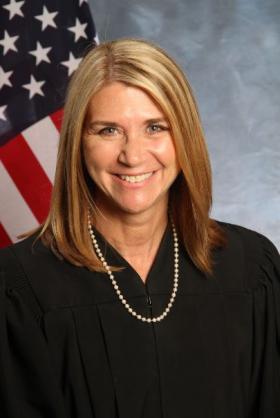 Theresa Whelan is a Suffolk County Family Court Judge and has held that position since 2008, following her election in 2007. She was recently re-elected to another ten year term in 2017. As a Family Court Judge, Judge Whelan hears primarily child abuse and neglect cases and presides over Family Treatment Court, better known as a drug court. Judge Whelan works hard to ensure the safety and well-being of children in the child welfare system. As a judge presiding over Family Treatment Court, she has monitored hundreds of parents as they address their substance abuse issues, and has safely reunited many families over the years.

In 2009, the Office of Court Administration appointed Judge Whelan as Lead Judge of the Suffolk County Child Welfare Court Improvement Project. This local child welfare collaborative is part of state-wide initiative to address court practices in cases where the court has removed children from their parents’ care. The goal is to ensure child welfare and safety, help parents safely take care of their own children, and to help children return home, or, if that is not possible, then to another loving permanent home, in a timely way.

Judge Whelan was appointed Supervising Judge of the Suffolk County Family Court in February 2016. In that role, Judge Whelan supervises a court consisting of eight to ten judges, five referees and numerous support magistrates. During her tenure, she has reformed court practice to better accommodate the needs of parties and litigants. She welcomed in a remote access domestic violence program, where individuals seeking orders of protection, in certain circumstances, can file their first petition from a hospital, domestic violence shelter or police precinct. She has also revived the Juvenile Treatment Court in order to better address the needs of court involved juveniles with substance abuse issues.

The Hon. Randall Eng, the former Presiding Justice of the Appellate Division, Second Department appointed Judge Whelan to the Suffolk County Attorneys for Children Advisory Committee in 2013. That committee is responsible for considering the qualifications of new applicants to the Attorneys for Children panel, as well as reviewing the recertification applications for existing lawyers on the panel. The committee then makes its recommendations to the Presiding Justice. The Advisory Committee also address issues that may arise with lawyers, conducts the annual training and ensures a fair and efficient rotation of lawyers available to take assignments from the court. As Supervising Judge, Judge Whelan has been the Chair of the Advisory Committee since February 2016.

In 2017, Chief Administrative Judge Larry Marks appointed Judge Whelan to the Family Court Advisory and Rules Committee, a statewide committee which meets monthly. That committee reviews proposed legislation and drafts its own proposals in the area of family law. More recently, Chief Judge Janet DiFiore appointed Judge Whelan to the New York State Commission on Parental Representation, which is tasked with holding public hearings throughout the state and reporting on the status and quality of lawyers representing parents in child welfare cases.

Judge Whelan began her law career in 1988 as a Suffolk County Assistant County Attorney. In 1990 she began her career in the judicial system, serving as a law clerk to three distinguished Supreme Court Justices. First she was a Senior Law Clerk to the Honorable Eli Wager in Nassau County Supreme Court. In 1993 she began serving as the Principal Law Clerk to the Honorable Mary M. Werner in the Suffolk County Supreme Court, where she worked for eleven years and then she worked for four years as Principal Law Clerk to the Honorable William B. Rebolini of the Suffolk County Supreme Court. As law clerk, she conferenced thousands of cases with attorneys and self-represented litigants, conducted legal research and drafted hundreds of decisions and orders. During her seventeen years in the Supreme Court, she worked in nearly every part of that court, including civil litigation, guardianship, tax certiorari and condemnation cases as well as matrimonial matters.

Judge Whelan is an active member of the Suffolk County Bar Association, where she was co-chair of the Family Court Committee from 2013 – 2016. She frequently lectures for the Law Academy or other law organizations. As a member of the Attorney for Child Task Force, she and the other members received the Suffolk County Bar Association’s President’s Award in 2016 for their work.

She is past president of the Suffolk County Women’s Bar Association and is a member of the Suffolk County Women in the Court’s Committee, where, in the past she has chaired the Breast Cancer Awareness Committee and co-authored informational booklets on family violence. She is the 1998 recipient of the New York State Bar Association’s Outstanding Young Lawyer Award, and in May 2017, The Center for Children, Families and the Law, at Hofstra University, honored her for her work in Family Court.

Judge Whelan received a Bachelor of Arts degree in English and a Master of Science degree in Policy Analysis and Public Management from the State University of New York at Stony Brook. She holds a Juris Doctor from Albany Law School.

Theresa Whelan lives in Wading River with her husband. She and her husband have two wonderful young adult children. In her spare time, Judge Whelan enjoys the outdoors, spending time running in the trails, hiking, kayaking or at the beach. She trains for and has run in several half marathons in recent years.