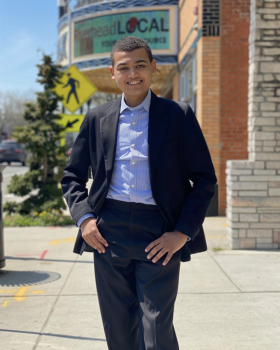 Skyler currently sits on the board of Temple Beth Emeth of Mount Sinai. In addition, Skyler works for the non-profit New Hour LI, an organization which advocates for women, children and families through the providing of direct services and resources. In his role at New Hour, Skyler often directly interfaces with members of the New York State Legislature to discuss policy and the impact of legislation on the lives of those across Long Island.

Skyler served as a political aide for Mayor Jesse Warren of Southampton. With unprecedented environmental and financial challenges facing Southampton Village, Skyler successfully helped to secure both open seats on the Village Board for two champions of the people. The success in the election has allowed Mayor Warren to begin the efforts to clean up the extremely polluted Lake Agawam and deliver wins for the people of the village.

In 2020, Skyler ran for New York State Senate. His historic candidacy garnered national media attention and support from people on Long Island and beyond. His issue-oriented campaign brought attention to the problems plaguing the working people of New York.

Now, Skyler is once again running for the State Senate, in the newly formed Senate District 1. He cannot stand idly by while hundreds of thousands of people go without healthcare, a climate crisis rages across the planet, and so many of his neighbors are without clean water. Skyler is ready and willing to represent each and every one of his constituents and improve the quality of life in New York.