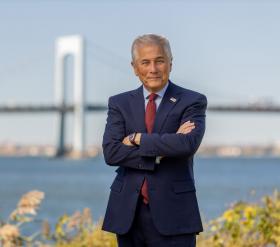 Our Democracy and Constitution are under assault. So much is at stake. The role of Congress has never been more crucial for our nation’s future. We are also emerging into an unprecedented age of innovation and infrastructure, and we have to make sure that our communities and middle class families are not left behind.

Robert, like many other closeted gay young men, struggled to find his voice. Coming of age in the suburbs was a lonely and isolating place. A trusted educator even once assured him there were doctors who could “make you well.” Conversion therapy was never an option, but the notion of “not being well” was tough to shake and helped Robert find his voice. He began to use it for others that society marginalized, left out, and refused to recognize.

Like so many, Robert joined arms to protest oppressive wars, march for civil rights, demand social and environmental justice, and advocate for causes that mattered to the community.

From Long Island communities to Capitol Hill, Robert’s path took him to the network studios. He became known for taking on tough topics in the media and never backing down to right-wing opposition and personal attacks. Robert has proudly been a leading voice in advocating for Planned Parenthood, LGBTQ+ rights, Medicare for All, tax fairness, gun safety policies, a truly safe and secure Israel and a two state solution in the Middle East, comprehensive immigration reform, border security, defending voting rights, restoring the SALT deduction, and taking on those that deny the climate crisis.

Robert walking with friends
Back in his hometown of Great Neck, Robert started a small business. Now in its 33rd year, ZE Creative Communications has grown and thrived through changing economies, severe recessions, and a global pandemic. ZECC has earned multiple awards and recognition over three decades.

As his activism evolved, Robert never lost sight of lifelong commitments to causes and community, building a strong record of standing up against hate crimes in all its forms, including antisemitism. He traveled with former Congressman Steve Israel to the then-Soviet Union in the mid 1980s to help Christians and Jews flee oppression, harassment, and imprisonment for practicing their faith.

Robert’s advocacy for reform led to his election to the Democratic National Committee. He’s been a strong proponent of major campaign reform initiatives, working for years to dismantle the superdelegate system and getting corporate money out of politics—that’s why Robert has pledged to not accept any corporate PAC funds in his campaign for Congress.

As his national voice grew, Robert was nominated by President Clinton to serve on the John F. Kennedy Center for the Performing Arts Presidential Commission on the Arts and by President Obama to serve on the National Council on the Humanities. He sits on the Boards of the Center for an Urban Future, Reach Out America and The White Lotus Foundation. In addition, he served for 20 years on the Board of the American Museum of Natural History as a government representative. He has also been honored by the LGBTQ Network of LI and Queens and the Long Island Progressive Coalition, in addition to serving as President of Great Neck B’nai B’rith and the American Jewish Congress Long Island Division.

A product of Great Neck Public Schools, Robert lives in the community where he was raised by his parents Mort and Annette. He is a proud brother, uncle, and neighbor committed to continue serving and learning from the citizens of New York’s 3rd Congressional District.