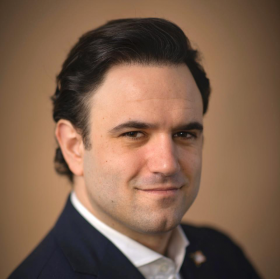 Like other millennials, Michael Marcantonio’s life has been defined by crisis at seemingly every major milestone. His first week in high school was marked by 9/11. His entry into the job market came during the Great Recession. And now his campaign for his first term in public office comes against the backdrop of the coronavirus pandemic.

Born and raised in Northport, Michael took an interest in politics at a young age, learning early on the good it could do for the community, but also, unfortunately, the bad.

One of Michael’s first political memories was attending Governor George Pataki’s town hall at Norwood Avenue Elementary School on May 7, 1997.

But that wasn’t true. LIPA filed its first tax certiorari proceeding against the Town of Huntington and the Northport-East Northport School District a little more than a decade later. They lied to the people of Northport, and Michael hasn’t forgotten that.

Michael has always put community first. When he graduated from Lafayette College in 2009 during the worst financial crisis since the Great Depression, he took up work organizing with 1199 SEIU and RWDSU, as well as Nassau and Suffolk County Legal Services helping families facing foreclosure stay in their homes.

After receiving his law degree from Duke Law School, Michael brought the LIPA issue back into the spotlight, forcing local and state politicians to confront the potential economic devastation the lawsuit could have on his friends and family. With his strong personal ties to the community, he galvanized lawmakers to push back against LIPA’s greed, even going as far as to help write legislation as a private citizen that passed the New York Senate unanimously.

To Michael, the LIPA issue encapsulates the larger, systematic problem with government— greedy special interest groups and powerful corporations have way too much influence over the corrupt politicians in Albany. That’s why he’s running; to return power back to the people of Long Island; to ensure that public education is fully funded, infrastructure is being rebuilt and the environment is being protected.