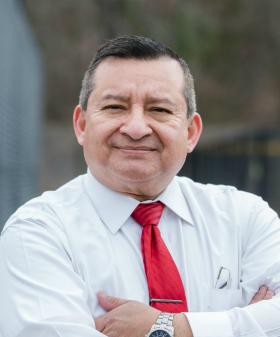 After nearly 30 years in the United States, Jorge Guadron’s personal story represents the essence of the American Dream.

Born in El Salvador, Guadron came to the United States as a teenager in 1980 fleeing political violence with his mother and siblings following his father’s death. He became an American citizen in 1995 and married his wife Irma the following year. He is the proud father of five and grandfather of eight children.

For nearly three decades in the United States, Guadron has worked hard and contributed to his community. He earned a Bachelor of Science in Business Administration from Nyack College and worked in the hospitality industry for 18 years. In 2002, he started his own marketing company, Guadron International LLC.

Now, a successful business man, Guadron has actively participated in the civic life of his community, in particular the El Salvadoran community, often called the “sleeping giant of Long Island” because of its size and political potential. Guadron is currently serving his second term as President of the Salvadoran American Chamber of Commerce. He has also served as president of United Salvadorans Abroad New York, which engages and empowers Salvadoran Americans in the political process.

As an immigrant who has worked hard to realize the American Dream for himself and his family, Guadron is convinced that everyone’s American Dream starts in their hometown. As a candidate for Islip Town Council, he is committed to providing Islip residents with safer streets and the Town resources that will improve their quality of life, including affordable housing initiatives, economic development programs and a sustainable budget process that keeps taxes down.

Guadron has been elected to three consecutive terms as a member of the New York State Democratic Committee for the 6th Assembly District that includes North Bay Shore, Brentwood, Central Islip, and parts of the Village of Islandia.

He is convinced that inclusiveness makes a community stronger and he is committed to providing the kind of leadership on the Town Board that will encourage more people from diverse backgrounds to participate in the life of the Town.