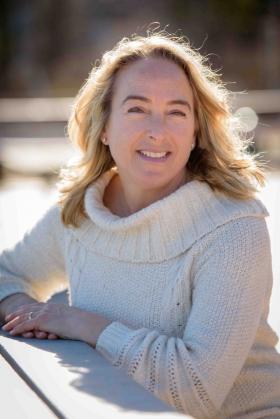 Born in Huntington Hospital, Emily Rogan grew up in Huntington Station. She graduated from Huntington High School and went on to earn a BA with distinction in English literature from Cornell University and an MA in journalism from New York University. Fluent in Spanish, Emily spent her junior year of college studying at the University of Seville in Spain.

Emily worked for Junior Achievement of New York, an educational non-profit and then at the CBS Newsmagazine, 48 Hours. Today Emily works as a freelance writer and editor and her work has appeared in major publications including Newsday and Runner’s World, Eating Well, Woman’s Day and Family Circle magazines. Emily has also written for NYIT, NYU and the American Association of Community Colleges, as well as several other organizations and companies.

For eleven years, Emily has served as a trustee on the Huntington School Board, four of those years as president and two as vice president. During that time, Emily has been a leader in the community, advocating for families and students and working collaboratively with her colleagues and the administration. She has served on several district-wide committees and was a key participant in the creation of the STEM Magnet school. Emily has valuable budgeting and negotiation experience; ever mindful of taxpayers, this year the school district’s budget was $600,000 below the state mandated tax-levy cap. In addition, Emily has participated in legislative workshops at the state and local levels, often speaking out on issues directly impacting her community.

Passionate about health and fitness, Emily has completed two marathons and several half-marathons, including the inaugural Suffolk County Half-Marathon. Emily and her husband Bob, also a Huntington graduate, have been married for 27 years and have two children, Henry, a rising senior at Kenyon College and Julia, a rising senior at Huntington High.