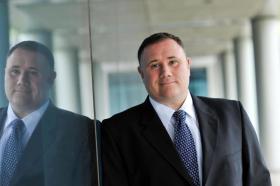 I was Born and Raised in West Islip and I graduated from West Islip High School in 1988, I attended Suffolk Community College, where I studied Criminal Justice, I also attended Hofstra University where I earned a Personal Trainer Certification). I have worked in the security field since 1988, Since 1992 I’ve been an Amateur Boxer and an Amateur and Professional Boxing Coach, I own the Long Island Boxing Gym, I also Volunteer with USA Boxing which helps at risk youth, because of this work I was unanimously elected to USA Boxing Metro's Board of Directors, I have also worked as a Real Estate Agent since 2004, I enjoy having the opportunity to apply the virtues my Mother instilled in me to help people every single day.

I met my wife Amanda in 1994. She is my soul mate, and we were married November 2000. Amanda and I have an outgoing, active eight year old son, Eddie and a beautiful one year old daughter Samantha. My family and I made a great decision when we moved from West Islip to Smithtown in 2007. Today my son goes to a fabulous school, my family and I love living in Smithtown, where we utilize the beautiful parks and patronize the many local businesses.

The event that leads me to want to be involved in politics and government was a car accident. This was a life changing incident that was something of an epiphany to me as to the role government plays in our personal lives. My experience from this event gave me the opinion that all government positions should be filled by folks from the community and that government should exist to serve the needs of the residents. I realized that I wanted to be in this position and that I wanted to be in government to represent my family, my neighbors and all the people of Smithtown.

The Smithtown Town web site lists the Town Clerk as a department and describes the position as:

The Town Clerk's Office is frequently considered the center of town government…..

The Town Clerk’s office is the town department that the residents of Smithtown most often interact with. Because of my life and business experience, coupled with my blue collar work ethic to make things better I will make the Smithtown Town Clerks Office run more efficiently. The town government works for the people, I will ensure that the “Center” of that government works better and I will give the Town Clerks Office a voice like it never had before.

I'm not a wealthy guy, I'm not starting a political career to make things better for my business or to stroke my ego. I'm in this campaign to change laws, rules and ways that don't work, to help people, to bring common sense to government, to be a voice, your voice, a vote for me is a vote for a better future in Smithtown.