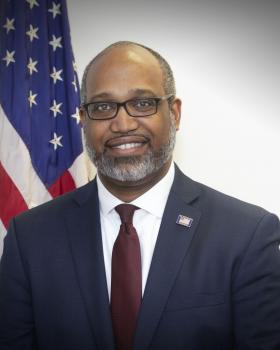 As the newly appointed Babylon Councilman, DuWayne Gregory has given 26 years of service to his country, county and community. An Army veteran, he has been elected six terms in the Suffolk County Legislature representing the county’s 15th legislative district. In 2011, he was chosen as the Legislature’s Majority Leader and was the first person of color to serve in that role. Just three years later he became the first person of color chosen as Presiding Officer, reelected annually by his colleagues. A native Long Islander, Presiding Officer Gregory took great pride in leading the Legislature on building an economy and environment in Suffolk County that would enable the middle class to thrive, revitalized downtowns, invested in convenient transportation and affordable housing, prioritized the fight against crime, and kept quality higher education accessible to all.

He has marked his career in public service with landmark achievements that include creating a gun offender registry, bringing back neighborhoods by creating the Suffolk County Land Bank which helps put blighted properties back on the tax rolls, and making Suffolk County the first municipality in the nation to ban the sale of powdered caffeine to minors. As part of his ongoing efforts to combat the drug crisis, he was proud to partner with CN Guidance and Counseling Services and Northwell Health to launch Project Connect, a program that dispatches an outreach advocate to emergency rooms to offer resources to people who have survived a drug overdose. He also directed efforts to create the county’s “Stay Alive LI” mobile app to put lifesaving information in the hands of those suffering from drug addiction.

Councilman Gregory has a deep desire to serve the public with integrity, transparency and accessibility, and he is very proud of the constituent assistance provided by his office to thousands of people every year.