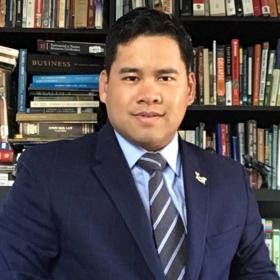 Dom Pascual is a financial crimes attorney, bank compliance officer, patriot, and an commisioned officer in the New York Army National Guard. Dom Pascual is a certified Judge Advocate Officer and specializes in military justice and investigations with the U.S. Army.

Prior to working for well-known British and American banking institutions such as J.P Morgan Chase, Dom served five years as a city attorney and hearing officer investigating government benefit fraud in the New York City Section 8 housing assistance program. He worked with the NY Department of Investigations (DOI) and the Department of Housing (HPD) to undercover hundreds of cases of corruption and fraud in the New York City welfare system saving taxpayers millions of dollars.

Dom attended Half Hollow Hills High School East and was an honors student and a scholar-athlete. Dom played varsity lacrosse and was involved with numerous academic groups such as the Debate Team and National Constitution Team. Dom attended SUNY Binghamton and received his BA in Environmental Planning and Political Philosophy with a minor in History. At SUNY Binghamton, Dom was a student leader and elected to the Student Government four years in a row. As a student leader, Dom regularly lobbied the SUNY trustees and his state elected officials for lower tuition, increased financial aid and better university facilities.

Later, Dom attended Vermont Law School and studied Business Law and Land Use Policies. During his studies, he interned with the Peconic and Nassau Land Trusts to study conservation and land preservation techniques in Long Island that maintain the open spaces and working farms on the North and South Folk. Dom, also interned with the NYS Attorney General's Office in the investor protector bureau and saw first hand how the Martin Act is a powerful tool to prosecute and investigate white collar criminals. Dom apprenticed with several attorneys and government agencies such as the Vermont Transportation Committee, Vermont Defender General and Vermont Legislative Counsel.

In 2005, Dom passed the Vermont and New York Bar Examinations and became an attorney-at-law.

Dom lives in Farmingville with his wife Aditi. As homeowners in Suffolk County, we understand the importance of our local and county services and how important it is that our tax dollars are spent wisely. Aditi, an attorney, is a graduate of SUNY Buffalo Law School. They were happily married at St. Patrick's RC Church in Huntington, NY. Together they share their vision of Long Island as a wonderful, safe and healthy place to raise a family. They also have a passion for Long Island's numerous parks and open spaces.