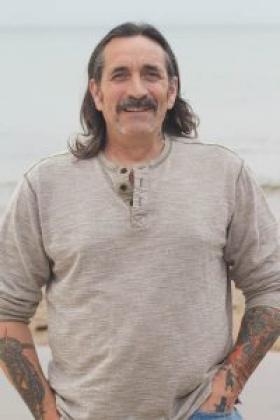 Dell Cullum was born and raised in Amagansett. He spent his early years enjoying the local beaches, for both recreation and also for watching the haulseiners work. His connection to the baymen came from growing up with their children. Cullum always felt the baymen trade was part of the heritage and history of East Hampton Town, particularly in Amagansett. From long walks on the beaches of Montauk with his grandmother as a child, to his long time admiration for the beauty of Lazy Point and Napeague, this town has always been special in his heart.

Cullum also has an equal compassion for the local wildlife. Spending the last 30 years in business humanely removing and relocating wildlife in six states, and as a professional photographer. He also volunteers his service for wildlife rescue, rehabilitation and education, where he shows folks how to co-exist with wildlife, rather than feel the need to eliminate it. Cullum also produces and hosts a television show called Imagination Nature, that is in it’s 4th year.

Because of his love for both the beaches and the wildlife, it’s no surprise that Dell Cullum became such an advocate against the trash and litter that plagues our beautiful town. In 2014, Cullum created the annual Shoreline Sweep event where each April the community comes together to clean almost 50 miles of shoreline, of both the north and south shores of East Hampton Town, from Wainscott to Montauk Point. The success of the annual event, prompted Dell to create the equally successful Napeague Sweep and the Sunday Morning Summer Beach Clean Up Club.

Cullum remains dedicated to wildlife, the environment, eradicating litter in East Hampton, and supporting the baymen and their families. These are his objectives from sunrise to sunset, each and every day.

Dell is endorsed by the Democratic Party.