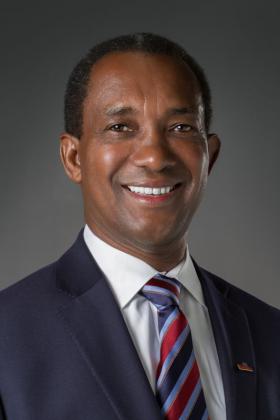 Clyde Parker will bring a strong new voice to Albany and a real commitment to representing all residents of the 3rd Assembly District.

“I’m not your typical candidate who has spent his life in political circles looking for ways to get elected. I’m everyman, the guy who has spent a lifetime looking for ways to succeed in the working world; the husband and father who has struggled to make a living and raise a healthy happy family.” An army veteran, Parker says military service taught him many valuable lessons about leadership and goals. “Leaders unite; they don’t divide. Being united with a common goal is how you succeed and win. This kind of leadership and representation is not going to come from the same-old people in the same-old circles.”

Parker has been a community leader and an activist throughout his entire life. When living in New York City, Parker formed a civic association in his neighborhood to address a host of quality-of-life issues. But the catalyst for his civic action was the drug-dealing in the neighborhood. “Drug dealers were hanging out across the street. So I got real involved.”

Parker and his wife Angelika moved to Bellport in 1998. They have three children and five grandchildren. When they moved to Bellport many of their neighbors were older. “I helped each and every one of my neighbors at one point — especially in the winter months. Most often the help they needed was taking them to doctors’ appointments.” Parker has been an active member of the Retired Seniors Volunteer Program, where he volunteered at New York Presbyterian Hospital, Carnegie Hall and Lincoln Center in New York. He has been involved in similar ventures in the Bellport and Patchogue areas.

Currently, Parker is in his second three-year term on Brookhaven Memorial Hospital’s board of directors, where he has volunteered his time to a host of initiatives. Since 2008, he has been a board member of the Bellport Boys and Girls Club. “I like working with kids and with the Boys and Girls Club I have been able to help kids with their finances to stay in college and connect them with jobs.”

“At the end of the day it’s about our families. Do we have the resources to raise our kids right and provide them with opportunity to succeed? Can we be there for our aging parents when they need us most?”

Parker has engaged in extended conversations with people from all across the 3rd Assembly District regarding political concerns, including the environment, property taxes, public transportation, mental health and healthcare. Among other issues, he said that affordable healthcare lies at the forefront of topics he would emphasize in Albany. “Having the ability to maintain your health and the health of your family is at the heart of any success a person can achieve. We have to make healthcare in New York accessible and affordable for all New Yorkers. It may not be easy but if other countries can achieve it, I think the richest and strongest country on Earth can do the same. It takes political will. Once I’m in office health care is going to be a cause I fight hard for.”

Parker is a former business owner turned business consultant, specializing in stimulating revenue growth for retail operations, including operational restructuring, location siting and merchandising, staffing and management, customer development, and marketing. His clients have spanned markets throughout the U.S. and Germany. He will bring his business acumen and entrepreneurial spirit to Albany to create jobs and opportunity within the 3rd District. “State leaders need to do more than just talk about creating jobs. They have to create opportunity at every level by training workers, matching their skills to jobs, and drawing more business and jobs to the region.”

Public transportation figures into job opportunity. “The buses are slow for people who need to rely on them to get back and forth to jobs right here. For people who need or want to work in the city or in Connecticut, again efficient transportation is an issue and it needs to be addressed at the state level. We can and should do better.” But Parker knows the answers can’t always lie with hard-working people paying more. “The answer can’t always be raising taxes on working people and people in the middle. We need a fairer tax system and we need to reinstate full deductibility of state and property taxes to lower our tax burden.”