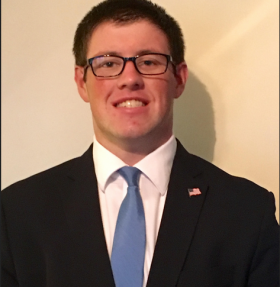 Brendan Cunningham earned a Bachelor’s Degree (B.A.) in Public Policy and Government from Hamilton College in 2015 and is currently the Deputy Director of Communications for the Town of Babylon. He previously served as the Special Projects Manager for the Babylon Industrial Development Agency, where he assisted with various economic development projects in the Town of Babylon. He is a resident of West Babylon and graduated from Babylon Jr.-Sr. High School in 2011.

At Hamilton College, Brendan was a four-year member of the varsity football team, served as the Philanthropy Chair for the Delta Upsilon fraternity, and played tuba in the College’s brass ensemble and jazz band. He was an active member of the College Democrats and participated in the annual Family Weekend debate in 2014. In 2015, he was selected as a finalist for the Clark Prize in Public Speaking. During his junior year, Brendan spent four months living in Washington, D.C. and gained experience in nonprofit lobbying as a Legislative Intern with the Humane Society of the United States (HSUS). At HSUS, he served as a liaison between the organization and congressional offices and committees and maintained the congressional cosponsor lists for bills related to animal welfare. In the summer of 2014, Brendan interned on the re-election campaign of Congressman Steve Israel (NY-3), where he phoned and canvassed voters while maintaining a database of constituent feedback.

Brendan supports campaign finance reform and believes that New York elections should be publicly-financed so that every qualified person has a chance to run for office without taking out monstrous loans or becoming beholden to powerful mega-donors. He supports the recent legislation that combats heroin and prescription opioid abuse in New York State by enhancing the oversight of prescription drugs and making treatment more accessible.

As the son of two public schoolteachers, Brendan’s primary focus as an elected official is the education of our children--ensuring that the educational experience of New York students is not only effective, but superior. With the termination of the Gap Elimination Adjustment, he strongly believes that Long Island school districts should receive every dollar of funding that they are entitled to. He maintains that the State cannot continue to pass along its revenue shortfalls to local school districts, where budget cuts directly affect our schoolchildren. In addition, he opposes the one-size-fits-all Common Core curriculum and does not think that teacher evaluations should be tied to test scores, a policy which takes critical classroom time away from our educators in order to “teach the test.”

Brendan is a firm believer in the ability of grassroots, community-based mobilization to effect change and will fight to make government work efficiently and effectively for his constituents