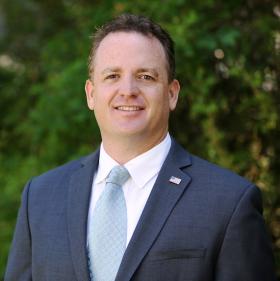 Bill Lindsay III was elected County Legislator of the 8th District on November 5, 2013. Bill has been a lifelong resident of the 8th Legislative District, growing up in Holbrook and graduating from Sachem High School in 1990. After earning his Bachelor’s Degree in Business Administration from St. Josephs College in 1994 he began his career in the private sector, working for Government Employers Insurance Company.

In 1999 Lindsay took a job as Vice President for Hilb, Regal and Hamilton (HRH). After years of success, Bill was offered and accepted a position transferring him to HRH’s Melville location charged with the responsibility of building a new department that had not previously existed. From 2003 to 2012 Bill was able to build this practice up to over $20 million in annual sales. Bill’s success can clearly be attributed to his hard work and dedication.

Bill has a strong sense of community and believes that helping one’s neighbor is an obligation shared by all. To achieve this goal Bill has been involved with many community organizations.

From 2007 to 2013, Bill served as the Vice President of the Melville Chamber of Commerce. During that time he chaired their Government Relations Committee and worked hard to advocate on behalf of the business community to assist in rebuilding Suffolk County’s economy from the ground up.

Bill has been involved with the Salvation Army in many capacities since 1995. He has served on their board for the last 15 years acting as their Chairman from 2005 to 2008. Since 1998, Bill has Co-Chaired their golf committee; which has raised over $ 750,000 in proceeds to fund summer youth programs for local kids in need. Since 2009, Bill has volunteered his time as a little league coach for Sunrise Little League. He is a member of the Friendly Sons of St. Patrick and is a member of the Environmental Defense Action Fund.

Bill is currently the Chairman of the Economic Development Committee, the Vice-Chair of Government Operations, Personnel, Housing & Consumer Protection Committee, and a member of Parks and Recreation.