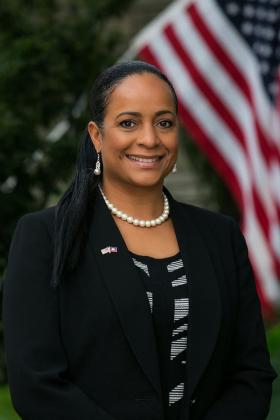 Astrid Fidelia is a Licensed Real Estate Associate Broker at Three Star Homes Inc. in Central Islip, NY and the Executive Director at Reviving Haiti, Inc., a non profit organization doing sustainable projects in Haiti. Prior to joining Three Star Homes, Astrid was the Senior Vice President - Strategic Planning and Marketing for Anchor Capital International. In her role, she created a financial platform for the international trade industry. Astrid leveraged her expertise from North America and brought this knowledge to Global Partners and Clients. Astrid was also Anchor’s corporate communications point person for all trade and structure finance services. She also oversaw the international real estate development projects and Franchising.

Prior to the Anchor Group, Astrid worked in the Town of Islip Foreign Trade Zone Authority as the Executive Director, an Administrator for the Federal FTZ Program and the Land Manager for town owned land. She also managed all operational, financial, event coordination and administrative functions. Her responsibilities included the development, implementation and direction of policies and programs designed to attract and encourage new business and industry to locate in the FTZ#52. Her work involved contact with high ranking officials of the public and private sectors. Her typical work activities were to procure, compile, prepare and present data pertaining to the FTZ. She initiated contacts with federal, state, local, private and foreign interest to promote potential trade business to the FTZ. She assisted interested firms in site selections, explained the FTZ program requirements and obtained additional benefits from county and state agencies. She encouraged international B2B between Foreign Importers and American Manufacturers. She is in the process of obtaining the CEcD designation from the International Economic Development Council.

In 2007 Astrid was elected 2007 – 2009 Suffolk County Director for (LIBOR) Long Island Board of Realtors (20,000 member board) and the 2007 -2009 Director for (NYSAR) the New York State Association of Realtors. She lobbied and served on several LIBOR and NYSAR committees such as the 2007 Legislative Suffolk County- Vice Chairperson, the Fair Housing, Education and Realtor Political Action. She is the founding President and Board Member of the Haitian-American PAC – a nonpartisan committee with a voice to represent the Haitian Diaspora through political action. She is an Advisory Board Member of the Haitian American International Chamber of Commerce and a founding member of the Islandia Central Islip Rotary Club. She is the 2009 – 2012 Rotary Club President, Board Member, Sergeant at Arms and Multicultural Committee Member (34 Rotary Clubs in Suffolk County). Lastly, she is the Recording Secretary of the Suffolk County African American Advisory Board.

She is married to Martin Fidelia Jr. and they have four children. Jasmin is a 27 year old Cortland University Graduate, Jonathan is a 26 year old Morehouse College Graduate, Joshua is a 14 year old rising 9th Grader and Justin is 6 years old.