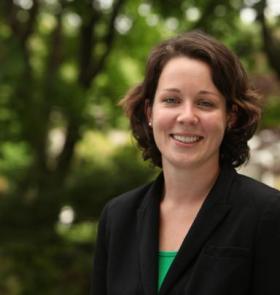 Amy Keyes was born in Patchogue, where she was raised with her two sisters by her parents, Peggy and Joe. Amy graduated from Patchogue-Medford High School in 2002, and earned her Bachelor's Degree in Political Science from Stony Brook University.

Amy began working full-time as a Legislative Assistant in the Town of Islip during her final semester at Stony Brook University in the Spring of 2007. She worked in the Town of Islip for the next four and a half years, eventually becoming the Deputy Chief of Staff for the fourth largest Town in New York State. In Islip Amy gained widely diverse experience through extensive work on government efficiency reforms, public parks projects (including the construction of the first new park in the Town for 30 years) and emergency management efforts (including Hurricane Irene response).

In 2012, Amy accepted a position as Chief of Staff for newly elected Suffolk County Legislator Robert Calarco. The move allowed Amy to work for the next two years on a stratum of legislative and community initiatives in her hometown, Patchogue.

After Legislator Calarco was re-elected, Amy began a position as a Legislative Analyst in County Executive Steven Bellone's Office of Intergovernmental Relations where she has worked to advance the County Executive's legislative priorities since January 2014.

Amy is an avid runner and regularly participates in local races. She is a novice but devoted gardener, and a member of the Patchogue Gardening Club. Amy is also a lifelong lover of history and belongs to the Patchogue Historical Society. She spends most of her free time enjoying all Long Island has to offer with her family. Amy married her high school sweetheart Jonathan Keyes in 2007. They are raising their four year old, Charlotte, at their home in East Patchogue.